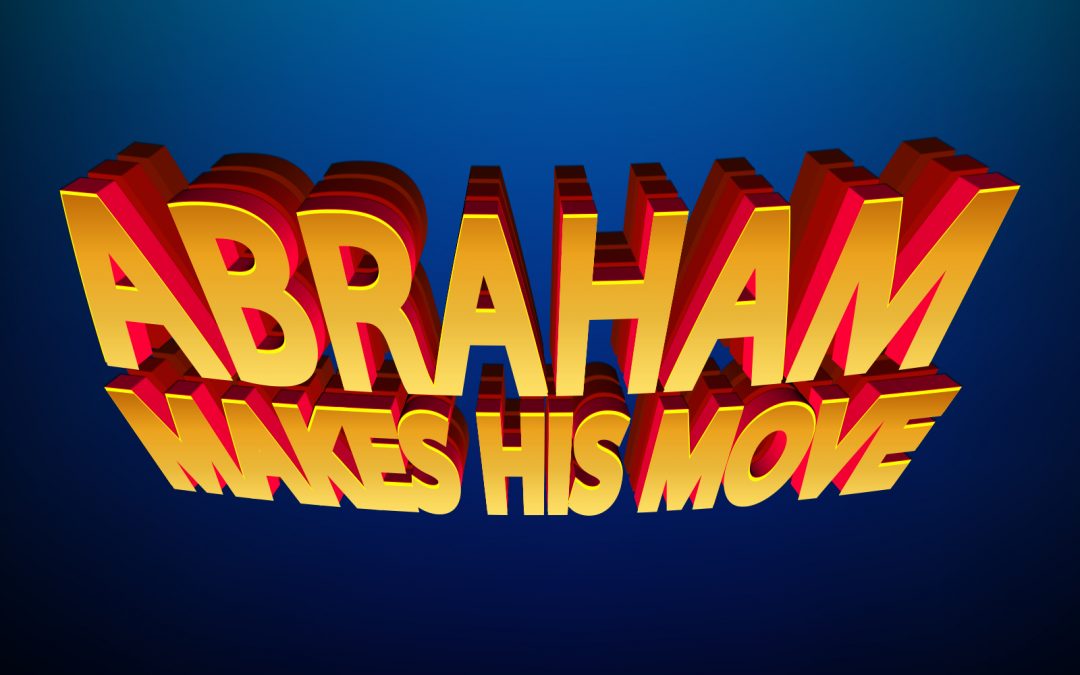 AIM: The aim of the ‘Abraham Makes His Move’ Childrens Lesson on Abraham’s Call is to teach children the importance of hearing and obeying God so that they might learn to trust and obey, no matter their age. 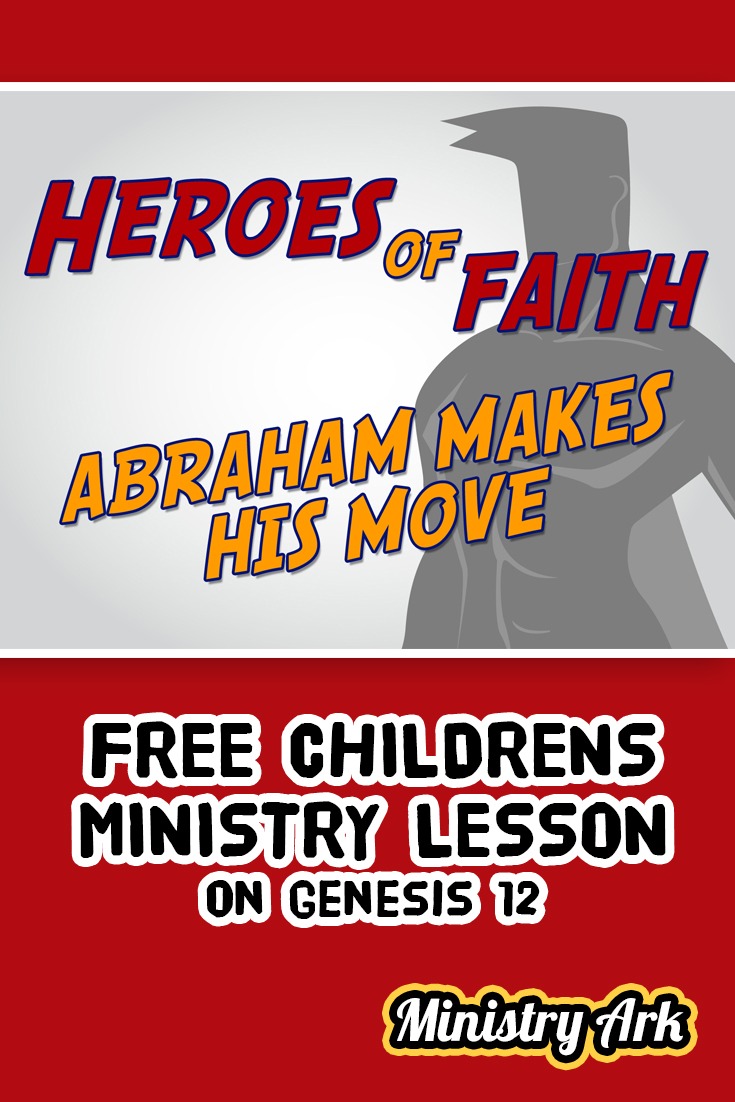 Explain to the children that Abraham was the first person in the bible to be called a friend of God. After Adam and Noah he was one of the first people to truly listen to God and follow His commands. You will want to read the bible passage from Genesis 12:1-9. Explain that this is the first passage in the bible that mentions Abraham. We don’t know much about him before this passage; only his family tree that is mentioned in chapter 11. Did Abraham already know and listen to God regularly? Had he heard God’s voice before? We don’t know. You could also show the first minute or so of this video on how God Calls Abraham.

Use a loudspeaker or someone speaking loudly from behind a curtain or door. Get them to give instructions to the leader. The leader should follow every instruction – even if it is silly or funny. For older children, you could use a fun prank video such as the Ellen Degeneres and David Beckham prank where David has to follow everything Ellen says. Alternatively you could blindfold someone and give them instructions to follow (such as how to find a banana and eat it).

Say: When Abraham hears from God that he is to move home it seems to be the first time Abraham has heard God speak. There is no other mention of God speaking to him before this… So let’s just imagine that one day we were walking along, enjoying our lives, when from out of nowhere we hear a voice telling us to move. Would you be willing to hear and then quickly obey?

Abraham heard and obeyed. He didn’t ask questions but moved according to where God told him to go. Not only that, but he made the decision knowing that it would affect his whole family. God didn’t just ask him to move, but He made some great promises too, we can read about them in Genesis 12.

“I will make you into a great nation,
and I will bless you;
I will make your name great,
and you will be a blessing.
I will bless those who bless you,
and whoever curses you I will curse;
and all peoples on earth
will be blessed through you.”

That must have been some fantastic words to hear… such great promises! Abraham obeyed because he believed. He believed that the words were from God and that God was speaking directly to him! So he heard and obeyed. What have you heard God say to you? What has He already said in His Word? Have you obeyed?

2. IT DIDN’T MATTER ABOUT HIS AGE.

Watch the Amazing 80 year old athlete John Pistone workout; he’s in much better shape then many that are half his age!

We might think it was a little odd that Abraham was so old, yet he was just beginning his life with God. Genesis 12: 4 says “Abram was seventy-five years old when he set out from Harran.” Wow! That’s pretty old! Perhaps there are people in your life that you have looked at and thought they could never do anything amazing because they are too old. Maybe you look at your granny or grandad and think they could never do anything special because they are passed it! You might think they are way to old to make a difference in the world. Or perhaps you have thought the opposite, and thought that you can never do anything amazing because you are too young. Yet when we learn about how God used Abraham and told him to move we realize that to God, age doesn’t matter. He can use and work through us at any age. 1 Timothy 4:12 says “Don’t let anyone look down on you because you are young, but set an example for the believers in speech, in conduct, in love, in faith and in purity.”

Say: Abraham was willing to trust God with his whole life. This was the first time God had ever spoken to Abraham (to our knowledge) yet Abraham was liking to obey God’s voice. [Choose two volunteers and blind fold them. Ask them if they are willing to try your food. Then open the dog food can. Show the rest of the children the outside of the can – with the dog label.]

Would you like to eat this food that I’ve got? [Let the blindfolded children decide. Whatever they do, congratulate them for their decision. If they eat it they will soon realize it is chocolate, if not, eat it yourself in front of the children.]

Trusting someone is difficult when you don’t know what the outcome is going to be. When you don’t know what will happen next it can be a little scary.Yet Abraham trusted God and it was the best thing he could ever do. God made him an amazing promise that he would bless the nations through Abraham – and he was faithful to that promise.

It was by faith Abraham obeyed God’s call to go to another place that God promised to give him. He left his own country, not knowing where he was to go. It was by faith that he lived in the country God promised to give him. He lived there like a visitor who did not belong. He lived in tents with Isaac and Jacob, who had received that same promise from God. Abraham was waiting for the city[a] that has real foundations—the city planned and built by God.

He was too old to have children, and Sarah was not able to have children. It was by faith that Abraham was made able to become a father. Abraham trusted God to do what he had promised. This man was so old that he was almost dead. But from him came as many descendants as there are stars in the sky. They are as many as the grains of sand on the seashore that cannot be counted.

So the next time you are wondering whether you can trust what God is saying or has said, remember how He helped Abraham and keep having faith that He will keep His promises to you too! 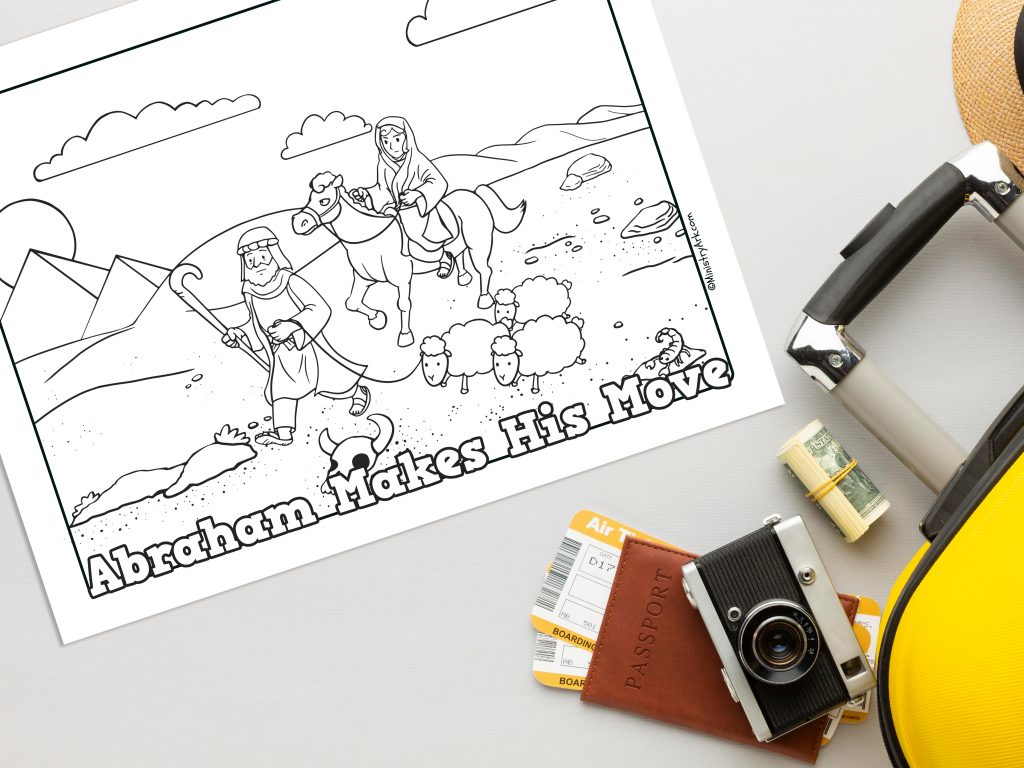 When did God tell other people to make a move?

Have two identical piles of the bible names below and the places below. Stick the two sets of the names of places up around the room. Choose teams and have them compete to race around the room to collect the places. Then have the teams try and match up the person to the place where God called them.

How would it feel to leave your friends? 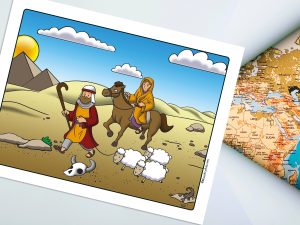 Click here for the Abraham Makes His Move Colored Poster

You will need: suitcases, luggage tags and markers.

Have a bunch of suitcases out with lots of label tags inside. Ask the children to take a luggage tag and write down something that they feel God is calling them to leave behind. Ask the Holy Spirit to come and reveal to the children the things that they need to leave, and perhaps some things that they need to take up on their journey with him. Once they have written their things down, they could attach them to the suitcases before they leave the room.

At this point, you may also want to ask if there are any children that want to leave their old life behind, to begin a new life with Jesus. 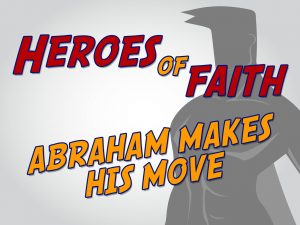 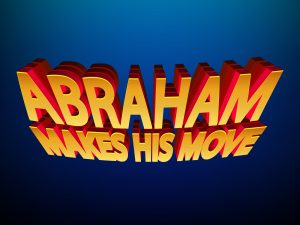 Click here for the ‘Abraham Makes His Move’ Powerpoint image 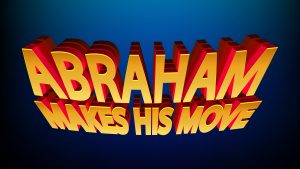 Click here for the ‘Abraham Makes His Move’ widescreen image