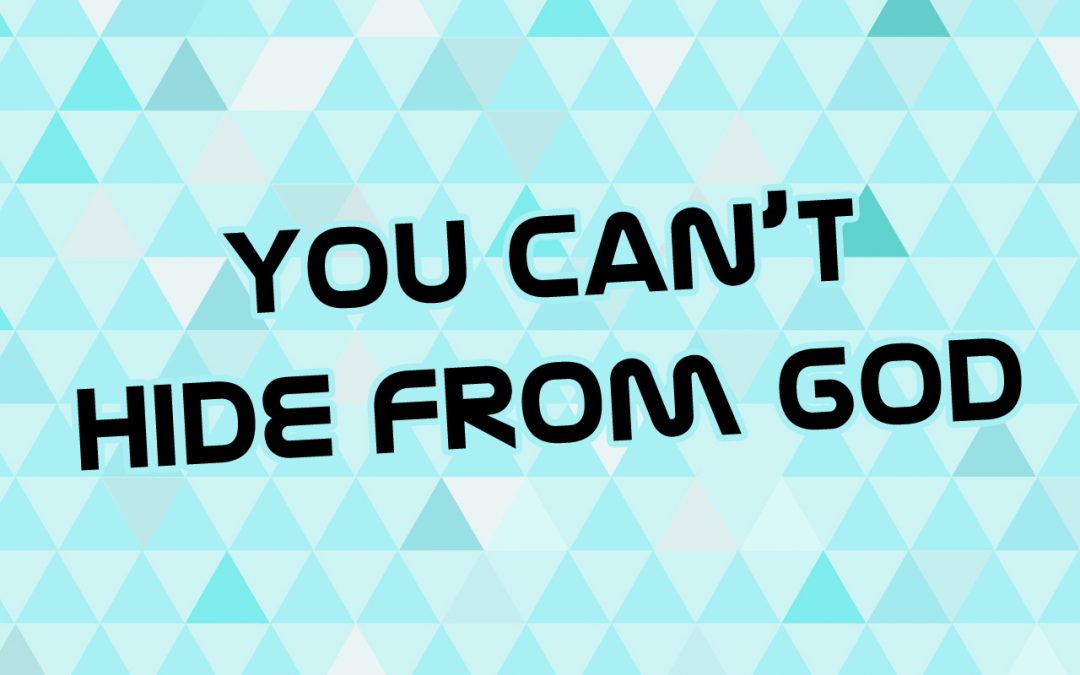 1) Hide and Seek. One player closes his or her eyes for a brief period (often counting to 100) while the other players hide. The seeker then opens his eyes and tries to find the hiders; the first one found is the next seeker, and the last is the winner of the round.

2) Sardines. 1 person is the hider and the rest of the people are the seekers. The seekers count to 30 then each go and separate ways to find the hider. When someone finds the hider they also hide with the person in that spot. The last one to get into the hiding spot with everyone is the new hider.

3) Hide the Ball. Put a ball under a cup and move it around. See if the contestant can remember which cup it is under even after all of the moving about!

Have children read Exodus 2:11-14. Get the children to act out the scene and discuss.

1) GOD SEES EVERYTHING WE DO.

The boy in that video was pretty upset wasn’t he? He was scared his dad was going to find out he was stealing. Maybe his dad would have yelled or punished him by grounding him or stopping him from having any allowance. Well, whether, like the boy, we get caught red handed or not, God sees everything we do. Nothing is hidden from Him. God is absolutely everywhere. He is our Heavenly Father. He sees EVERYTHING. There is nothing that He cannot see. That means He sees when we do good things… but He also sees us when we are doing bad things too. He sees everything we do!

When thinking about this David wrote a poem we can find in Psalm 139:7-12 (get a child to read it if possible) ‘Where can I go from your Spirit? Where can I flee from your presence? If I go up to the heavens, you are there; if I make my bed in the depths, you are there. If I rise on the wings of the dawn, if I settle on the far side of the sea, even there your hand will guide me, your right hand will hold me fast. If I say, “Surely the darkness will hide me and the light become night around me,” even the darkness will not be dark to you; the night will shine like the day, for darkness is as light to you.’

David knew that there was absolutely nowhere to go where we can hide from God. Jesus knew this too, he told the Pharisees years and years later “There is nothing hidden that won’t be revealed, and there is nothing secret that won’t become known and come to light.” (Luke 8:17)

The cool thing is that even though our Father God sees all that we do, He still loves us. He still cares about us and He still wants us to talk to Him and be His friend. How cool is that?! We don’t have to be afraid of our Father finding out what we have done, because He already sees it, and loves us anyway.

The passage shows us that God knew what Moses was thinking. He was worried that he had been caught out, so he ran. When the Pharaoh heard about what he had done, this made him angry too – so Moses had to run from him too! Moses was scared. He was afraid of what Pharaoh might do.

You know God sees the secrets of our heart. It says in 1 Samuel 16:7 “The LORD does not look at the things people look at. People look at the outward appearance, but the LORD looks at the heart.” God knows what we think about and what we might feel. He knows why we might hide things from Him. God looked into Moses’ heart and saw that he had been angry and upset about how his people were being treated. Where other people had no idea what was in Moses’ heart and mind God knew exactly what Moses was thinking and what he felt. That’s the same for us too… we may think we can hide what is in our heart from God… the hurt, the sadness and the upset, maybe even the hate, bitterness and anger. He sees it even if we can hide it from everyone else. God saw and knew that Moses wanted to protect and help his people. This made God happy because God loved His people too. He wanted to protect them too.

Moses was able to run away from Pharaoh but he was not able to run away from God. In fact, he wasn’t even able to hide what he had done from the other Hebrews. When he tried to tell them how wrong they were for fighting they told him that he had no right to tell them… he had done even worse than they had! Now, we have to remember that Moses had not yet been given the 10 Commandments by God. So although we would consider this an act of murder, we don’t really know how God saw it… but we do know that it would take Moses 40 years before he would be able to go back to Egypt.

3) GOD WILL FORGIVE US IF WE COME TO HIM.

Write on a large card heart with fountain pen and make it disappear with an ink eraser pen. View title powerpoint here.

We never find out if Moses asked God to forgive him for what he did to the Egyptian. The Bible is silent on this one. Yet we do know that God forgave Moses. Why? Because He still uses Him to help save His people. If God had not forgiven Moses then He wouldn’t want to speak to him… let alone trust him to do the biggest job He had.

You know, if we are willing to come to God and show Him what is going on in our heart; the things that we have done or thought about doing then He is willing to forgive us and wipe the slate clean. For example, if I have been thinking bad thoughts about someone (write hate or bad thoughts on the heart) and I ask for forgiveness then He will forgive us and forget what we have done (erase the writing from the heart). [Do this a few times with different examples]. In fact, this is the reason that Jesus came! He came so that we might be forgiven for all the wrong things that we have done, said or thought. He wants to wipe our hearts clean from all our wrong. That means that we don;t need to feel bad or guilty for those things anymore. All we have to do is put it right with other people (ask their forgiveness too if we need it) and ask God to help us not to do it again.

You can make the clues as difficult or easy as you want.

People that tried to hide from God:

Gideon – tried to hide from the angel, but the angel saw him (hid for fear of the angel)

Saul – when Samuel was about to anoint him as king (hid for fear of being King? Not feeling worthy)

Hebrews 4:13 – And there is no creature hidden from His sight, but all things are open and laid bare to the eyes of Him with whom we have to do.

Jeremiah 16:17 – “For My eyes are on all their ways; they are not hidden from My face, nor is their iniquity concealed from My eyes.

What is a better alternative to hiding from God? i.e. what can we do instead of hiding?

An interview with Moses. Have children take turns to sit in the Hot Seat and role play as Moses. Remind them that there is no incorrect answer as long as they don’t change what is written in the Bible. We don’t know how Moses thought/felt most of the time.

Did you know that your mom was your mom growing up?

How did the Pharoah’s son Rameses treat you growing up?

What did it feel like to grow up in a palace?

What did you feel knowing you were a Hebrew and that many of your Hebrew people were been badly treated or killed?

Why did you kill the Egyptian?

How did it feel to know that your secret was out and that people knew you were a killer?

Why did you run away and not face up to what you had done?

What were you thinking when Pharaoh tried to kill you?

How is knowing God sees everything going to change the way we act? Is there things that we want to start doing or things we want to stop doing? We can ask God to help us live lives that are pleasing for Him. Lives that He loves to watch and get involved in!

Is there anything that you have felt bad for and maybe tried to run away from God as a result?

Is there anything you are hiding from God?

1) Make a heart shaped card where the flaps open and you can see inside. (See picture)

2) Fold your note into a heart