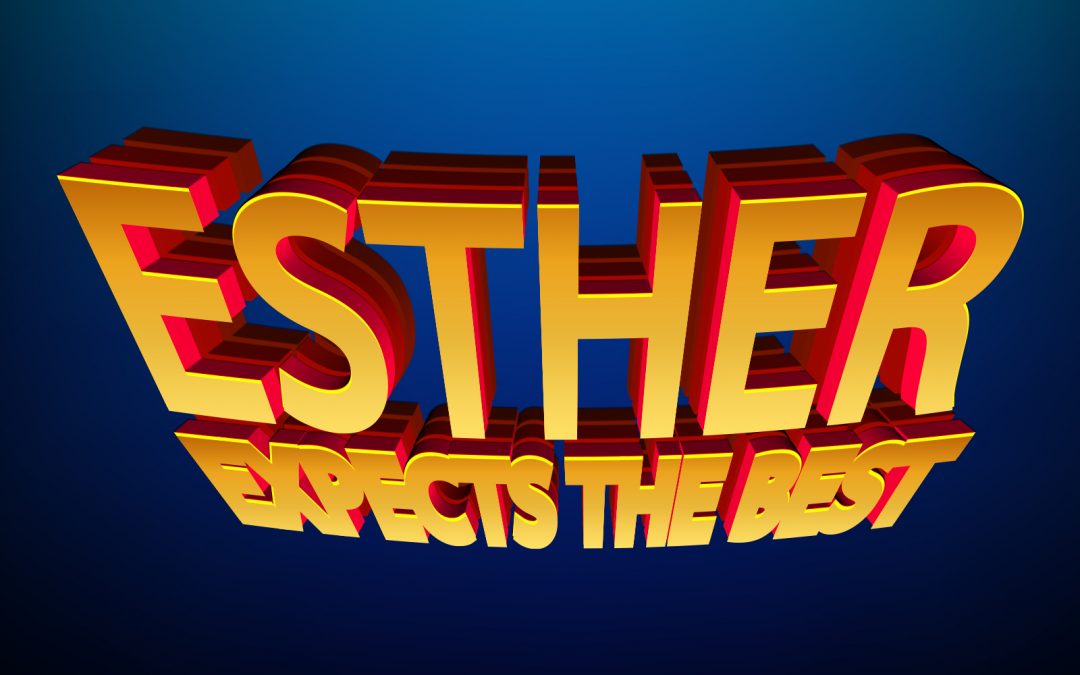 AIM: The ‘Esther Expects the Best’ Childrens lesson on Esther is a lesson that can be used on its own or within the ‘Heroes of Faith’ VBS or teaching series. It teaches children that to have faith means to expect the best of ourselves, God and others.

1. Never Have I Ever. Children sit in a circle. Each player starts with the same number of fingers. Everyone takes turns in saying something that they have done. If others have done it also they must put a finger down. When all your fingers are down you are eliminated from the game.Question: Did you expect others to have done what they had done? Why?

2. Slurp! Each player in a team has a straw. Players race to their jug, slurp as much as they can and when the whistle blows, they return to tag the next person to try.Question: Did you expect to win or lose? Why?

BIG VERSE: Now faith is confidence in what we hope for and assurance about what we do not see. Hebrews 11:1.

You will want to set the scene by telling the whole story of Esther. As the story is quite long and complex, we suggest using a video to do this. However you could also pick out passages to use to refer to from the book of Esther.

1) ESTHER HAD FAITH BY EXPECTING THE BEST.

Show this mini movie of Olaf and Sven thinking positively. Pause it at 1:02 and ask this question:

In this little clip of Olaf and Sven, who expected the best to happen? Why

Show a few more seconds of the clip. Pause it at 1:15. Then ask the question: Is Olaf expecting the best thing to happen? Why/why not?

Sven brings the carrot back and Olaf is happy again… until he sneezes of course! Olaf forgot to think the best of Sven. He thought that Sven would think of himself, but Sven helped Olaf. Sometimes we can be like that with God. We think that He is our enemy or that He is out to get us, or that He doesn’t care about us. So that stops us from thinking the best is ever going to happen.

We need to look at Esther and realise that she expected the best! That’s because having faith means expecting the best. When her people were in trouble and King Xerxes was the only person that could help, she didn’t panic or run away. She prayed and fasted. She went to see the king even if it might mean her own death. Yet she expected that the best would happen. She went before the king expecting that God would be on her side. She expected the best because she believed in faith that God would help her and save her. That He would not only save her, but all of her people too.

2) ESTHER  KNEW GOD WANTED THE BEST FOR HER LIFE.

What do YOU know? Have a few verses mixed in with famous phrases or ideas. Ask the children to separate the bible verses from the famous phrases. To do this, you could have some children volunteer to do a game, or you could simply say or hold up the phrases yourself.

Expect the best for your future. Do you believe that God has a good plan and purpose for your life? Or do you constantly worry about what will happen to you tomorrow or when you get older? We can expect that God has good things in store for us… because He does! He promises us that he will always be with us and that ‘goodness and mercy’ will follow us wherever we go! That means we don’t need to be afraid! We can stand strong and believe that good things are coming our way…. That doesn’t mean that we will never go through difficult times. It simply means that God will be with us when we do and that, ultimately, our future looks good.

3) EXPECT THE BEST OF OTHERS.

MINI SKIT: 3 characters are needed for this skit, a mom and two siblings [you can change the names!]. Working with a small group and don’t have any adults to play the parts? Give the parts in the skit to some of the children and see how they act it out.

Mom: Chloe, can you please just tidy your room already.

Chloe: Mom, Evie’s ALWAYS leaving the bedroom a mess. She never cleans or tidies it. I’m doing it all the time. I’m fed up.

Mom: Chloe, I’m sure you’re helping to make the mess. Just tidy it up.

Chloe: It’s not me. It’s Evie. She never tidies after herself. Can I not just have my own room?

Mom: You know we don’t have enough space. Can’t you just help Evie to learn?

Chloe: I don’t think she’ll ever learn. She never even thinks about tidying up.

Evie: Hey, I heard that, you know!

Chloe: Well, it’s true you never even bother that it’s me doing all the work!

Evie: I’ll try better if you just help me a little.

Chloe: Ok, I suppose I could help you a little…come on, let’s try this tidying together.

Chloe: [interrupting] Yes now! Come on, it’ll be great when we both know how to tidy!

Expect the best of your friends and family. Are you always expecting the worst of your friends and family? Chloe in the skit had to learn to think of her little sister Evie in a better way. She had to start expecting that she could change. That’s how she showed that she had faith in Evie. Do you always think they are going to do something that you dislike or they are going to let you down? Queen Esther could have expected King Xerxes to be a terrible king. She could have believed that he would never listen to her. Yet she prayed and fasted and believed that God would work in the king and that he would do the right thing.

Is there someone in your life that you always expect to do the wrong thing, to hurt you or to disappoint you? Start trusting God and believing that He can begin a work in that person. When we pray, God can help others to do the right thing. Perhaps you need to pray that God will help you to expect better things of that person, even when they let you down. We can get tired and weary of believing a person will ever change, but the bible tells us not to lose hope or get weary in doing good. Keep believing, keep trusting – even when it gets tough!

Perhaps you can commit to pray for one person that you want to begin expecting the best for.

[Perhaps pass around some paper or card crowns that you have made that children can write the name of a friend on. They or you can then say a prayer that God would help them to expect more from others.]

Print out the following superhero masks onto colored card or paper. Add the verses below to each mask, then hide them all over the room. If you have lots of children simply duplicate the masks and the verses. Once the children have found the bible verses ask them to sit down or lie down, simply getting comfy. Then ask them to think about their bible verse and what it means and what Jesus might be speaking to them. Ask the Holy Spirit to come and show them something for them personally as they think and pray. After a few minutes, discuss with them together or in small groups, about what they feel God might be saying to them.

Who is it that overcomes the world? Only the one who believes that Jesus is the Son of God. 1 John 5:5.

But when you ask, you must believe and not doubt, because the one who doubts is like a wave of the sea, blown and tossed by the wind. James 1:6.

Whoever believes in me, as Scripture has said, rivers of living water will flow from within them. John 7:38.

Therefore I tell you, whatever you ask for in prayer, believe that you have received it, and it will be yours. Mark 11:24.

If you declare with your mouth, “Jesus is Lord,” and believe in your heart that God raised him from the dead, you will be saved. Romans 10:9.

He replied, “Because you have so little faith. Truly I tell you, if you have faith as small as a mustard seed, you can say to this mountain, ‘Move from here to there,’ and it will move. Nothing will be impossible for you.” Matthew 17:20.

Now faith is confidence in what we hope for and assurance about what we do not see. Hebrews 11:1.

How does it feel to expect the best of someone or something?

Ask the children to think about the following question as they do one or some of the activities below:

How would Esther have felt going before the king in faith? 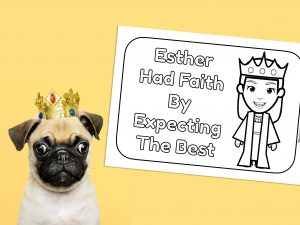 FUN CRAFT: Children can make these fun superhero masks. Simply print off the templates that are given onto different colored card. Once finished, remind the children that superheroes always expect the best. They expect that they will always be able to save the people that need saving and win the battles that need winning. We can be little heroes too by serving God and asking him to give us His power to expect the best of ourselves, God and others.

Father God, Please help me to expect the best of you and others. Help me to have faith to believe that you are going to do what you have said you will do. Help me to keep hoping and believing even when things get tough. Amen. 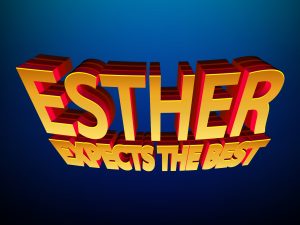 Click here for the ‘Esther Expects the Best’ PowerPoint image 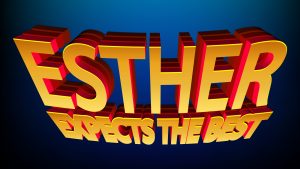 Click here for the ‘Esther Expects the Best’ widescreen image 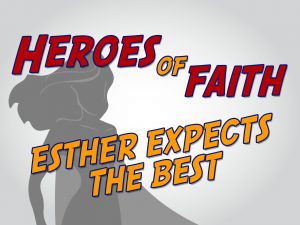 As an alternative, you can use the ‘Expect the Best’ powerpoint images if you are intending to use the lesson as a standalone lesson: 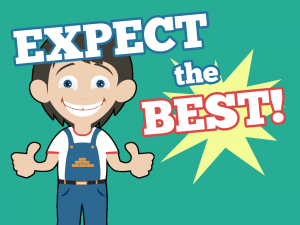 Click here for the ‘Expect the Best’ powerpoint image 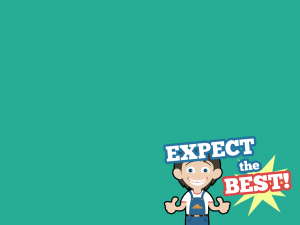 Click here for the ‘Expect the Best’ background image