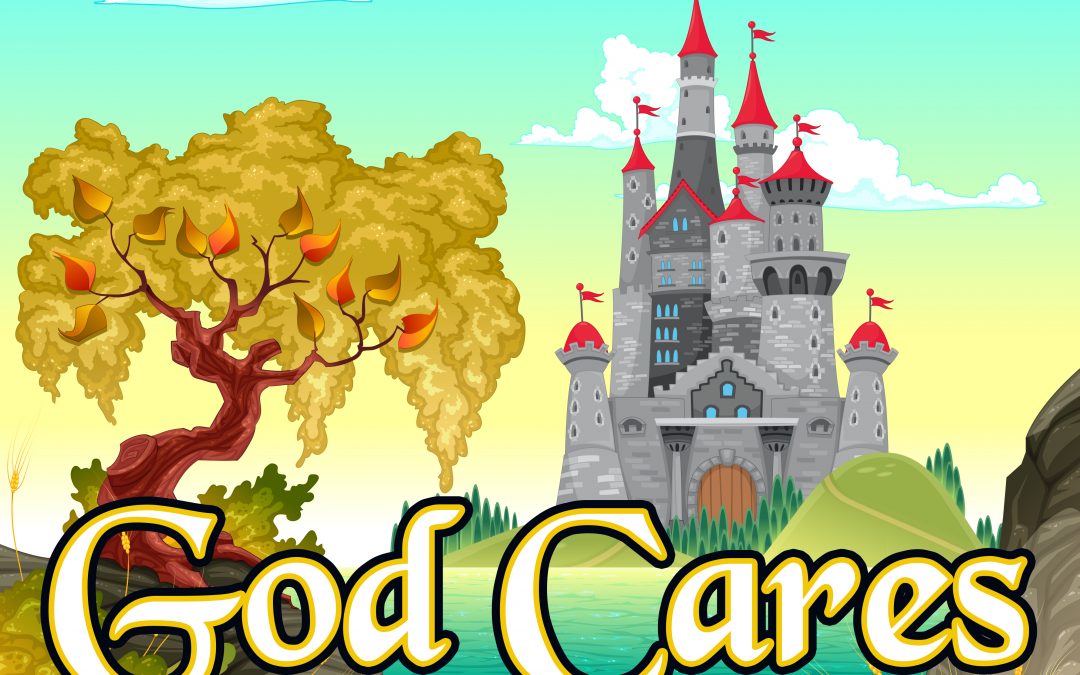 BIG IDEA: GOD CARES ABOUT WHAT HAPPENS TO YOU

AIM: The ‘God Cares’ Childrens Lesson on Moses (Exodus 2:1-10) is a fun session developed by KidZKlub in the UK. They have given us permission to share this session, you can view the PDF version here.

BIG VERSE: God cares about what happens to you. 1 Peter 5 verse 7

You will need: 2 large plastic swords (‘lances’) with pins on the end of each, loads of balloons taped to the set and two pairs of goggles. Pick one girl and one boy to play. You’ll need an equal number of girls’ balloons and boys’ balloons.

Stick all the girls’ ones on one side of the set and all the boys’ on the other side. Try and keep as much distance between the sides as you can to avoid injury during the game. Give both the kids goggles to wear, to avoid injury, and a lance. When you shout “Go!” they pop their balloons as quickly as they can. You could do boys then girls, and time them, if you’d prefer. The winner is the first to pop all their balloons.

You will need: 2 plastic axes and two bowls filled with cold baked beans. Pick one girl and one boy to play. Place a bowl of baked beans on a table in front of each team. When you shout “Go!” the kids have to eat the beans as fast as they can, using the axes as spoons. The winner is the person who’s eaten the most when you blow the whistle.

Here comes Smelly Elvin! Urgh, Elvin, what’s that stuff all over your face? It’s like red and yellow pustulous spots on your face. He must have the dreaded Dungeon Pox! Maid Marian said she’s not interested in him, looking like that. So… if we all had the same spots, then maybe she wouldn’t notice Smelly Elvin’s so much and wouldn’t be so bothered by them?

You will need: 4 red lipsticks.

When you shout “Go!” two helpers from each team run round their team putting a red mark on the face (forehead, cheek) of each kid. The winners are the team with the most marks on their faces.

You will need: 4 toilet rolls (we managed to find some ‘medieval’ toilet roll: the horrible tracing paper type) and two lances.

Pick 2 boys and 2 girls for this popular game. Put two loo rolls on each lance. Get two helpers to hold one lance in front of each team, horizontally. Each kid stands by a bog roll in front of their team. When you shout “Go!” they pull their bog roll out as fast as they can and the winners are the first pair to finish both their bog rolls.

Moses in the basket.

In our Bible Lessons this term we’re going to learn all about a man called Moses. To fully understand who he was, we need to go all the way back to when Moses was a baby.

Moses was born at a very difficult time, a time when a bad man called Pharaoh was leading the country of Egypt. Now, Moses’ people were called Jews and they were like a separate tribe in Egypt. They were big and strong and Pharaoh hated them. So he came up with a plan. He made a law, which said that every baby boy born to Jewish people, had to be murdered! No questions and no exceptions. Imagine if you were about to have a baby. Imagine how you’d feel. You might even think, “God can’t love me, if these bad things are happening to me.” But I want to ask you a question. Was it God’s fault that Pharaoh was so evil? Was it God’s fault that Pharaoh was on a power trip and didn’t care who he hurt? Of course it wasn’t. Bad people sometimes make bad choices that hurt us. But it’s never God’s fault and it never means that God has stopped caring about us.

When Moses was born, his parents came up with a plan. They hid him in a basket and set him off down the river, just hoping that when he landed someone would help him and he’d be saved. Let’s watch the video and see what happened. (play video) Kids, when no one else could help baby Moses, God was watching and God made sure he was safe.

Next week we’re gong to find out what happened to him, but for now I want you to remember that no matter how bad things get, God always cares about what happens to you.

You will need: a goldfish in a bag, a goldfish bowl filled with water (do this the night before, so that the water is fully oxygenated), a frisbee, a pot of yoghurt and some aquarium trimmings, eg. plastic plants and treasure chests. Make sure they will fit in the bowl.

A: Does anyone want to see my new pet? His name’s Gordon the goldfish. Now, Gordon is a very special fish, so I want to make sure I look after him properly. First of all, I need to find him a house. Now, what have we got round here?

B: How about this yoghurt pot? If I clean it out, do you think Gordon could live in there? (let kids respond)

B: OK then, what about this frisbee? I could put some water in it. It could make a nice orange house. (let kids respond)

A: No! Gordon wouldn’t like that either. Can anyone see somewhere Gordon could live? The bowl! Do you think Gordon would like the bowl? (let kids respond)OK, we’ll put him in there. (carefully transfer fish from bag to bowl) But it looks a bit boring, doesn’t it? I tell you what, because I love Gordon so much, I’m not just going to give him a house, I’m going to do better than that. I’m going to give him some food and some toys and some nice scenery to look at (carefully place items in bowl with fish) You see, Gordon’s my fish, so I care about what happens to him. I don’t just want his life to be OK, I want it to be fantastic! And it’s the same with you and God. Just like Gordon belongs to me, if you’ve become a Christian, then you belong to God. And God wants your life to be fantastic. Not just an OK life, but a great life, because God really cares about what happens to you.

You will need: a testimony of God’s provision. Here’s a brief outline of one we’ve used.

That’s right, you know. God’s shown me that lots of times. A few months ago my husband got offered a job, but it was right on the other side of town and he had no way of getting there. So we started to pray and ask God to give us a bike. Well, a few days later my friend rang and asked if she could come round because she had something to give us. Oh wow, we thought, maybe God’s answered our prayers and she’s going to give us the bike! But when she came, guess what she handed over? – car keys! She wanted to give us her old car! Now, who thinks that a car is better than a bike? I do. You see, God heard our prayers and because he cared about what happens to us, he gave us the very best.

You will need: Gordon the Goldfish in his bowl and an aquarium net.

That’s right. God loves us loads. But you know, some people are so daft, they don’t want God’s love. They don’t want God to protect them and care for them. They think they can sort things out themselves. Now, I want to ask you a question (take fish from water with a small net and lay it in a prominent position, so kids can see) If I take Gordon out of his water and just lie him on the stage, if I left him there, without his bowl to protect him or (refer to helper from first object lesson) to care for him, do you think he’d be OK? Do you think he could look after himself? Of course he couldn’t.If he stays there it’s going to be a disaster. He needs to be in his bowl. He needs to stay close to the person who cares for him. And it’s just like that with us. God cares for us and if we want our lives to work out we need to make sure we stay close to him (put fish back in bowl) Just like Gordon belongs in his bowl, we belong with God. 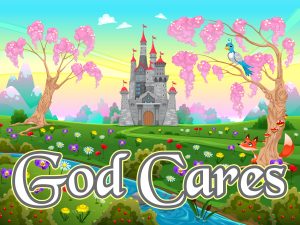 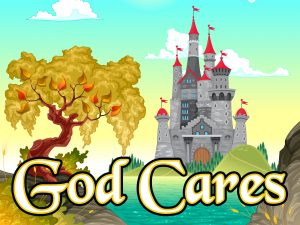