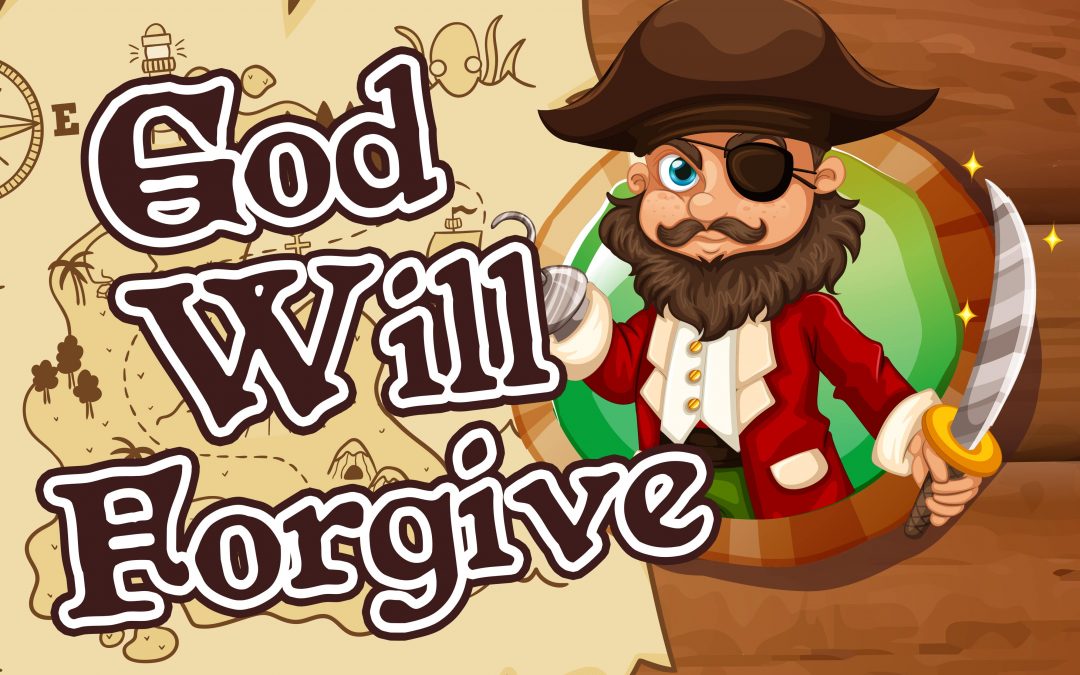 AIM: During the ‘God Will Forgive’ Childrens Lesson on 1 John 1:8-9 children will learn that if they own up and admit to doing wrong, God will always forgive them. This is the eleventh lesson in the Pirates series, written by Kidz Klub. You can check out the whole lesson in PDF format here.

We’re really lost this time! (Start the club using storm sound effects and then a crash) The Pirate Ship lands and there is snow everywhere! (Decorate your club room accordingly!) “It must be the North Pole!” The team captains see there are snowballs all over the floor so decide to have a snowball fight.

You will need: Lots of screwed-up white paper all over the floor. Before the club you need to tape a line right down the middle of the stage, dividing it into left and right.

Pick 4 boys and 4 girls for this game. Make sure the snowballs are scattered all over the stage. Place the four girls one side of the line in front of the boy’s team (so the kids at the front can’t help them) and the boys on the other side. When you shout, “Go!” the teams have to throw the snowballs at the other side. The winners are the team to have the least snowballs on their side when the whistle is blown. Watch out for cheats!

The cabin girl or boy comes on dressed in a parker with a fury hood, scarf and gloves. They can’t find any food but have found a frozen T-shirt. The team captain asks the kids, “Is anyone is brave enough to put it on?”

You will need: Washing line and 6 iced t-shirts. Make these by soaking in water and freezing the night before the club. It is a good idea to have a practice and work out how long you need to defrost them for, so the kids can still put them on. You don’t want them to have defrosted and be dripping and you don’t want them completely frozen so the kids can’t put them on.

Choose 3 boys and 3 girls to play. Set the washing line up across the back of the stage. When you shout, “Go!”, the kids have to run and get their t-shirt from the washing line, put it on, come back and stand in front of their teams to do 10 star jumps. The team to complete first is the winner.

We’re at the North Pole, so let’s go looking for Father Christmas! We’d better disguise ourselves as him so that the Elves don’t get suspicious!

You will need: 4 tubs of Vaseline, 2 giant bowls of cotton wool buds and two tables.

Choose four boys and four girls. Before the game starts use the Vaseline to make the shape of a beard on each of the kids faces. Place the table in the centre of the stage with a bowl of cotton wool balls on either side of the table. Line the kids up in front of their teams either side of the stage. When you shout “Go!” the first boy and girl run to their bowl and dunk their head in the bowl so the buds stick to their faces. They run back and tag the next kid in their line and they do the same. The first team to have everyone with a cotton wool beard wins.

One of the Team Captains remembers that Santa wears a hat as well as a beard – and those Elves won’t be fooled easily! We need hats!

You will need: 10 Santa hats, 10 big punch balloons and ‘poppers’ stuck to the ceiling above each team or sticks with pins for helpers to suspend over the kids heads. Before the club stuff each of the hats into a balloon and blow them up.

When you shout “Go!” helpers throw the balloons into the teams and the kids have to throw the balloons at the poppers. When the hat falls out a kid puts it on and stands on their bench. The winner is the team to put all their hats on first.

Now that we have all dressed up for Father Christmas he may have presents for us. Maybe we’ll find him next week!

In our Bible Lessons over the next two weeks, we’re going to find out what happened just before Jesus started his work on earth. Now, the Bible tells us about a man called John, who was Jesus’ cousin. When you first hear about him, John sounds a bit strange. The Bible say he lived in the desert, wore a coat made of camel skin and for his dinner he ate honey and locusts. Urgh! But even though John sounds a bit strange, God had chosen him to do a very important job. He’d chosen him to get people ready to meet Jesus.

All sorts of people came to John in the desert and asked him what they could do to get ready? To tax collectors John said, ‘Stop lying and cheating people out of money.’ To rich people he said, ‘Share what you’ve got with people who don’t have as much. To soldiers he said, ‘Start being honest. Don’t harass people and don’t accuse them of things they haven’t done.’

And to everybody he said ‘You’ve got to say sorry for your sins and get back with God.’

You will need: about 6 large boxes built into a tower. You will also need a can of spray paint. Make sure that one side of each box is plain so that you can write on it with the spray and it will show up. You may need to paint the box to make sure this works properly.

Okay, I want you to put your hand up if you can tell me a sin and I’m going to write them down on these boxes (Ask the kids for their ideas and spraying one sin onto each box as you do so. Make sure at least one of them is a sin that people would consider to be ‘not that bad’ like lying. Spray this one onto one of the lower boxes) In the world there are lots of types of people. Some people seem quite nice. They’re kind and helpful and they only do little things wrong like tell a small lie occasionally (point to box which says ‘lying’) But then there are other people who do really bad things like stealing or even murder! (point to relevant boxes)

If we’re one of the good people, then we could compare ourselves to them and think that we’re OK, so our sin doesn’t really matter. But you know, the Bible says that we have all sinned and that even if we’ve only broken one of God’s laws (pull bottom box out so that all the boxes fall down) it’s as if we’ve broken them all. God is holy and pure. No matter how small our sin seems to us, it still ruins our relationship with God so we all need God’s forgiveness. People who seem nice need God’s forgiveness just as much as people who we know are nasty. We all need to own up and ask God to forgive us.

You will need: a pint glass filled with water and some dark coloured food dye.

You know no matter how hard I try (put your hand in the glass and flick out bits of water as if you were trying to get the dye out) I can’t get the dye out of this water. I can’t make it unmix. And no matter how hard we try, we can’t get the sin out of our lives. That’s why we need God. He’s the only one who can forgive us and he’s the only one who can give us the strength to change. That’s why we’re learning today that we need to own up to anything we’ve done wrong and ask God to forgive us.

If you have someone on your team with a new baby you could get them both up on stage to do this. If not, you could talk about someone you know and have a picture of their baby on the screen. You also need a dirty looking nappy (diaper) in a nappy (diaper)  bag.

This is my baby (say baby’s name) He’s (say how old) months old and I really love him. And do you know what? I even love him when he does a big, smelly, messy, disgusting poo in his nappy (diaper). Now I don’t like his poo, if course I don’t, in fact it stinks, I hate it, but all that messy poo doesn’t stop me loving him. And God’s a bit like that with us. He doesn’t like it when we sin, when we mess ourselves up by doing things that are wrong, but just cos he hates our sin, it doesn’t stop him loving us.

Now because I love **** when I realise he’s done a pooey nappy (diaper), do you think I just leave him to sit around in his poo, getting all sore? I don’t do I? I go and clean him up. And God’s a bit like that with us. When we sin it is as if we have made ourselves all dirty. And because God loves us so much He wants to clean us up. He wants to forgive us. If we want God’s forgiveness all we have to do is come to Him and own up and ask Him to make us clean again and He promises to do that every time. Kids if you’ve done stuff wrong, don’t sit there in your sin, own up and ask God to forgive you. 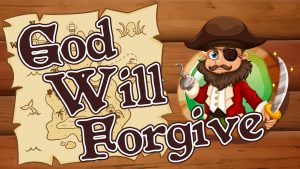 Click here for the ‘God Will Forgive’ widescreen image 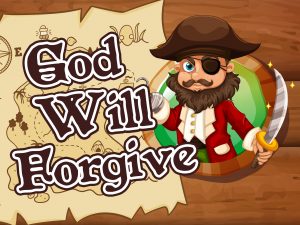 Click here for the ‘God Will Forgive’ PowerPoint image