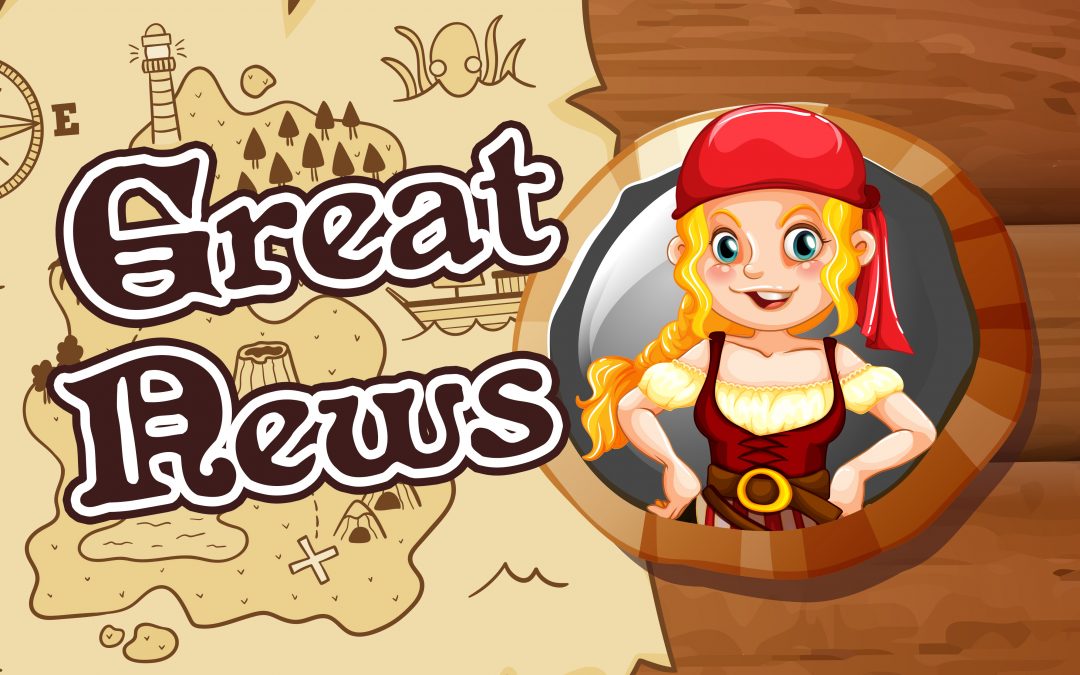 AIM: In the ‘Great News’ Childrens Lesson on Luke 2 children will learn that Jesus came to the world as great news that will change their lives! This lesson is part of the ‘Pirates’ series and was written by Kidz Klub. You can download the PDF version of the lesson here.

You will need: 2 large green capes, made from a big circle of material with a whole cut in the centre for a child’s head to go through, 2 Father Christmas hats, 2 bags of tinsel.

Pick 2 boys and 2 girls. The players stand in front of their teams. Choose one from each team to be dressed in the green cape. When you shout “Go!” tinsel is passed into the back of the teams and through the team to the front where the other kid will dress their partner like a Christmas tree. The winner is the ‘tinseliest’ player!

The Team Captains have been looking for Father Christmas but have found 2 stockings instead.

You will need: 2 large homemade stockings and a variety of boxes wrapped as presents.

The Team Captains hold the giant stockings in front of their teams. When you shout “Go!” helpers pass the presents into the teams. They are passed through the team to the front and then stuffed into the stocking. The winner is the team to fill their stocking first.

You will need: a Father Christmas costume and a suitable male helper to wear it!

Open up a present to find it empty. This is just no good; you will have to find Father Christmas. “Ho Ho Ho!” You find him and he has a large sack of presents!

You will need: 2 scarves for a three legged race, 2 stockings and a sack of wrapped presents.

The club leader could say, “Would anyone else like to win a Christmas present?”

You will need: If you have a small hall you can cover a table in 20 different prizes. If you are in a larger hall then visibility will be a problem so make a Christmas present board. Use a large rectangle of hardboard painted in a bright colour. Put different screws in it to hang the presents off or attach the presents using parcel tape. Two helpers can then hold the board vertically for the kids to see.

Give all the kids 60 seconds to memorise what is on the board or table. Then cover the prizes with a sheet. Choose one girl to guess and prize and then one boy. They win the prize they guess and a helper brings the prize out to them. Carry on the game, choosing a boy and then a girl until a team guesses wrongly or runs out of guesses. The team still left guessing correctly is the winner.

Angels appear to the shepherds. Luke 2.

Today’s Bible Lesson took place just after Jesus was born. The Bible says that on that night, there were a group of shepherds sitting out on the mountain side, trying to get some sleep. It would have been cold at night, so they were probably all huddled up under their blankets, just dozing off, when suddenly a huge bright light appeared in the sky. The shepherds were so scared they didn’t know what to do! Then, out of the light, the voice of an angel came, saying, “Today I bring you good news of great joy.” “What could the good news be?” the shepherds thought. Maybe they’d won the lottery. Maybe they were going to be millionaires… Oh yeah! But then the angel said. “This good news is going to be great for everybody in the whole world.” Probably not the lottery then! “Today Jesus, the saviour of the whole world, was born.”

You will need: some posters or a cardboard stand for a recently released film. If you ask your local cinema they’re usually quite happy to give them away once they’ve finished with them. Use the latest big film in this lesson; at the time of writing it was ‘Finding Nemo’.

Hands up if you’ve been to see the film Finding Nemo. It’s great, isn’t it? Now, I want to ask you, how did you know that film was on? (take some answers)Your friend told you. That’s right. Now, how did your friend know? (take some answers) They saw the adverts. The film company knew that Finding Nemo would be so good, that they wanted everyone to hear about it. They put adverts on the TV, on the bus stops; there were even adverts in McDonalds. They didn’t want anyone to miss out.

Well, in the same way, God knows that being friends with Jesus is so good, he doesn’t want anyone to miss out on that. He made sure that the shepherds didn’t miss out, by sending an angel, he made sure the wise men didn’t miss out by sending a star and he’s made sure that you haven’t missed out by sending you here to Kidz Klub. I want you to turn to the person next to you and say, “You’re not here by accident.” It’s true you know. It’s not a fluke that someone came down your street and told you about Kidz Klub. They came because God sent them and God sent them because he wants you to know that Jesus can be your friend and that is good news that will bring you great joy.

You will need: an undecorated Christmas tree on the stage. You can have some lights already wrapped round it, but don’t turn them on until the appropriate point in the object lesson.

Hands up, who’s put up their Christmas tree? It’s really exciting, isn’t it? But imagine if you got your Christmas tree out of the cupboard and then just left it standing there, all boring like that (point to undecorated tree) It would be a bit stupid, wouldn’t it? Especially if there was a big box of decorations sitting there ready to use. Christmas trees are OK, but they only get really, really good when you add the decorations. (Have another helper start decorating the tree) And you know, life can be a bit like that too. You might think your life is OK, you might have a cool family and friends at school and everything might be all right. But I want to tell you if you add Jesus, your life will get even better. (insert personal testimony) Because when you become a Christian, Jesus comes and changes you on the inside. He gives you great joy. It’s like he turns the lights on (switch on fairy lights) and a life that was OK becomes really exciting. That’s why we’re learning today that knowing Jesus isn’t boring, it’s good news of great joy.

You will need: a huge box wrapped with Christmas paper and ribbons. 2 helpers, one denoted ‘A’, the other ‘B’.

B: Oh, right, thanks. (A bit apathetically)

A: Well, aren’t you going to open it?

B: Well, I might later, if I can be bothered.

A: If you can be bothered?! But look at it,it’s huge! It’s really exciting. (rattle the present by helper two) Go on, open it now.

A: Well, you’ll never know if you don’t open it will you? Go on, open it now. It’s something you really need and you really want.

B: Yeah, but how do you know I need it? I might not. I might be fine without it.

A: Well, you’ll never know if you don’t open it!

A: (hits themselves over the head with the present in frustration) You are one weird cookie!

Kids, can you imagine being offered a huge present like this and then just not opening it? Just leaving it sitting there for a year or two? It would be pretty stupid, wouldn’t it? But you know, people do that with Jesus all the time. They come to Kidz Klub or to church and hear all these true stories about how Jesus has helped other people. And they hear that Jesus wants to be their friend too. And do you know what they do? They just sit there. (look at the large present and put on an apathetic voice as you talk) I bet it wouldn’t work for me, they think. Maybe the helpers make up all this stuff and it’s not really true anyway. Maybe I’ll just leave Jesus there and think about how great he is in a few years time. Kids, that’s crazy. Jesus is here, right here and he wants to be your friend now. That’s what he came to earth to tell you. He loves you and he wants to help you and that is good news that will bring you great joy. In fact it will change your whole life. But just like ‘B’ had to decide to take the present and open it up, you have to decide to take Jesus up on his offer. He wants to be your friend, kids, but the question is do you want to be his friend back? If you do, then we’re going to pray right now… (lead the kids in a prayer of salvation in which ever way you prefer) 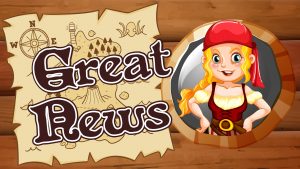 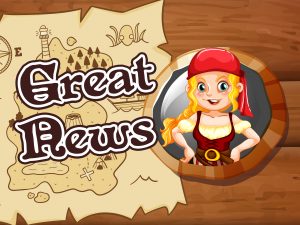