‘Nothing is Impossible’ Childrens Lesson on Acts 14 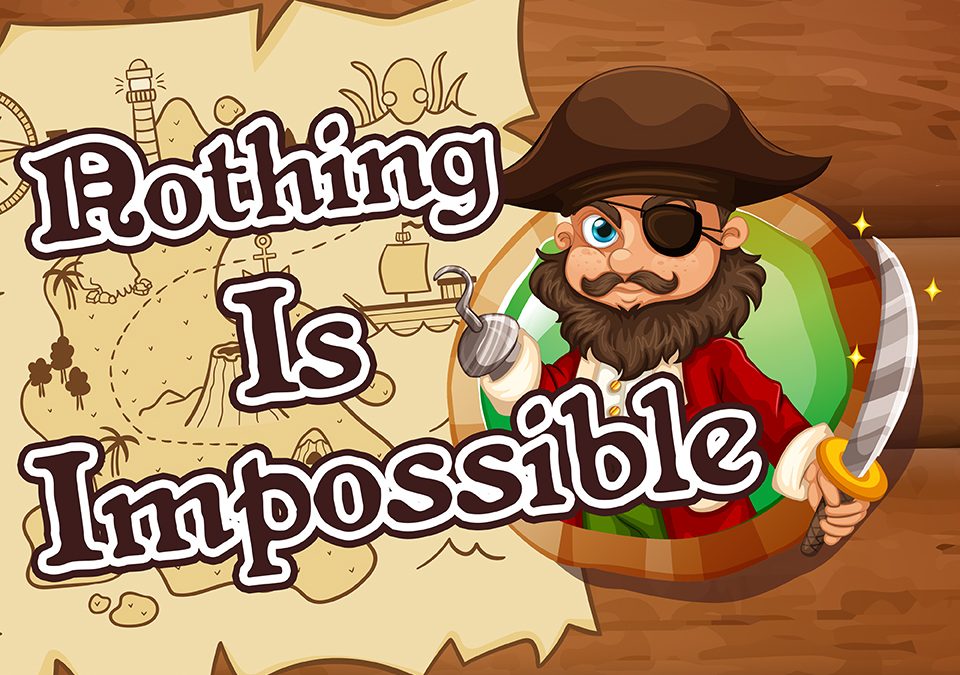 This session is week 9 of the   Klub ‘Pirates’ teaching series.

BIG IDEA: NOTHING IS IMPOSSIBLE FOR GOD

The cabin boy/girl comes on with two bowls of jelly. Hoorah! We have raided Hook’s food supplies!

You will need: 2 bowls of jelly and 2 big plastic spoons.

When you shout, “Go!” the boys and girls Team Captains go through their teams and feed them all jelly. The winner is the first team to eat all their jelly.

You will need: 2 washbowls filled with jelly, 1 table, 2 empty Coke bottles with the tops cut off to look like large glasses, plenty of cheap paper plates (they wobble more and make the game funnier)

Choose four boys and four girls to play. Put a large washbowl of jelly at either end of the stage and place a table in the middle with the two cut off coke bottles on it. Line the kids up in front of their own teams and between their jelly-filled bowl and coke bottle. When you shout, “Go!” give the first kid in each line a paper plate to scoop up the jelly from the bowl. They then pass it down the line and the last kid empties it into the coke bottle. Keep dishing out the paper plates so that plates of jelly are continually passed down the lines. The winner is the team to fill their glass up the quickest.

You will need: A pair of big, size 11/12 wellies filled to the top with jelly.

Choose four boys and four girls to play. First of all, get each kid to take their shoes and socks off and roll their trouser leg up. This game is a relay race, so get two girls and two boys to stand at each end of the stage (or depending on the shape of your hall, they could do circuits around the teams). Choose one girl and one boy to start the race. When you shout, “Go!” they put one of their feet in the welly and run to the next kid. The next kid in their team puts their foot in the welly and runs to the next player. The race finishes when the every member of the team has completed. The winner is the team to finish the fastest. To add some amusement, the losing team captain could eat some of the jelly out of a welly! Hook is out of the dungeon and we decide to be nice to him so offer him some jelly. He refuses it and says he hates us, threatening to cut our throats and remove our gizzards. Well fine! Hook you can be like that, we won’t be nice then!

You will need: A chair, 1 Balloon popper (A square of cardboard with lots of pins or screws pushed through and stuck firmly on with masking tape.The pins need to stick out both sides; take great care!) 2 buckets of balloons filled with jelly.

Choose 2 boys and 2 girls to play. Place Hook on a chair, centre stage, and put the buckets of balloons at each side of the stage. A worker needs to stand behind Hook and hold the balloon popper vertically over his head. When you shout “Go!” the kids grab a jelly-filled balloon each from their buckets and run to the middle. They throw their balloon at the balloon popper to try and get the jelly to land on

Hook’s head. When the whistle blows to stop the game, the winner is the team with the most popped balloons. (You may want to mark a line or spot for the kids to throw from)

Drag Hook off and put him back in the dungeon for being such a misery-guts!

BIG VERSE: Nothing is Impossible with God. Luke 1 v 37.

In last week’s Bible Lesson we learnt how Barnabas had encouraged Saul by what he said. After some time, the Christians sent Saul and Barnabas out traveling together to do God’s work. Saul was now known as Paul. Paul and Barnabas came across many difficult situations. One time they met a man who had never walked in his whole life. The man really wanted to walk but there had been something wrong with his legs when he was born. Now, even today’s doctors would have trouble helping a man like this to walk and back then the doctors knew even less than they do today. It would be impossible for people to help this man but nothing is impossible for God.

As the man listened to Paul preaching and telling of all the amazing things Jesus had done the man became excited. If Jesus healed people and was still alive, Jesus would heal him too. Paul could see that the man believed in God, so he turned to him and said, “Stand up on your feet.” At that, the man jumped up and began to walk. God had healed him. It seemed impossible, but God had done it. And you know, God is still the same today. There is no situation or problem that you have that is too big for Him. And even when no one else can help, God can because nothing is impossible for God.

Object Lesson #1 Bigger Than Us

While you do this object lesson you might want to be wobbling about amusingly on a pair of roller blades. You could also have another helper, representing your sister, whizzing along the stage. Feel free to change this story to one that fits your own life.

Things that are impossible for us are really easy for God, because God is just, well bigger than we are. He understands things that we never will.

You know, when I was little, my big sister was already a teenager and she could do loads of cool stuff that I never could. She could roller blade when I was still wobbling all over the place. She could get to the highest level on our computer games when I got killed on the first one. She could even do wheelies on her bike. Kids, she could do that stuff because she was bigger and cleverer than I was. And because she was bigger, things that were impossible for little me, were easy for her. Well, it’s like that with God. Because God is bigger than us, a lot bigger, and because he’s been around since the beginning of time, things that are impossible for even the cleverest people on earth are just easy for God. And that’s why we’re learning today that no matter what your problem is, God can sort it out because he’s amazingly big and amazingly powerful and that means that nothing is impossible with God.

We used a healing testimony here. If possible show a photo on acetate or scanned into the computer. We talked about a car crash and showed a photo of the mangled car after the crash and then a photo of the person fit and well after they’d been healed. Use a healing testimony from your own experience. Emphasize that making the person completely better was impossible, even for the cleverest doctors, but God is cleverer than that and so for him it was easy. Nothing is impossible for God.

You will need: A ‘magic’ colouring book. If you don’t have one, you can buy them from Mission Magic (missionmagic.co.uk) If any of the mums from your Kidz Klub have become Christians, it might be great for them to share their testimony here. If they won’t manage to speak and demonstrate the colouring book, you could show the colouring book while they speak. Obviously adapt the details of the text below to fit their testimony!

You know, some clever doctors can help people’s bodies get better, but I don’t know anyone but God who can change people on the inside. A few years ago, I used to feel really down all the time. It was as if my problems were just too much for me. We had no money because I owed so much to the catalogue and the loan man was always knocking on the door wanting more from me. When Christmas was coming it was a big worry because I didn’t know how I was going to get my kids their Christmas clothes and the more I thought about it, the more down I got, until in the end I was properly depressed.My life just felt empty like this book. (flick the book to show the blank pages) I’d drop the kids to school and then I’d just sit there feeling down, I didn’t clean up the house or anything. Maybe some of you know how horrible that feels because you’ve watched your mum feeling depressed too.

Well, my friends tried to help me and my mum did, but nothing seemed to make any difference until one day one of my friends took me to church and told me about Jesus. As soon as I walked into church I realised something there was different. (Flick through the colouring book to show the black and white pictures) The people were so happy; just being around them started to make me feel better. And then I found out that just like they had God for their dad, I could have God for my dad too. All I had to do was say sorry for the bad things I’d done and decide to live for him and he would be with me all the time. And so I did. I prayed and told God I wanted to be his child and things started to change. The more I got to know God, the less down I felt and the more I prayed to him, the more I knew he was helping me with my problems. In fact, God became so real, I stopped worrying and as I stopped worrying, I stopped feeling down. (Show coloured pages of the magic colouring book) Happiness came back into my life again. Kids, there might be people in your family you’re worried about, people who have problems on the inside. If there are, pray for them. Ask God to show them that he loves them. Ask God to help them change. God can answer those prayers. God can change people, even on the inside, because nothing is impossible with God. 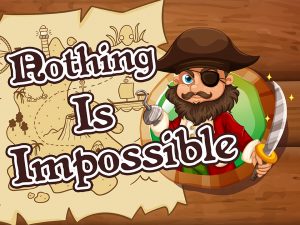 Click here for the ‘Nothing is Impossible’ PowerPoint image 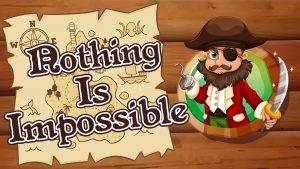 Click here for the ‘Nothing is Impossible’ widescreen image