AIM: The ‘Roman Soldier Encounters Jesus’ Childrens Lesson (Matthew 27:45-56) will help children to see the power that Jesus displayed on the cross and how they can be forgiven because of all that Jesus did.

BIG VERSE: For God so loved the world that He have His One and only Son, that whoever believes in him will not die but have eternal life. John 3:16.

Read Matthew 27:45-56. Discuss with the children the type of power that Jesus showed on the cross. The veil of the temple was split in two and there was an earthquake. The Son of God had given his life for the whole of humanity.

Choose a couple of volunteers and have them compete to do the silliest faces. Give them different feelings to communicate when they have: a) Seen something scary b) Been silly with friends c) Watched a sad movie d) Had the best day ever! e) Needed the toilet f) Won a race g) Shock at seeing something truly amazing!

Say: Wow! Those faces were funny! You did a great job of showing the feelings that you might feel in those situations! Imagine the kind of faces the people might have had after seeing all the crazy things that happened when Jesus died. There were earthquakes, stones breaking up, and even dead people rising from the dead and going up into heaven (Matthew 27:52). Wow! That’s a lot to handle! All of that happened because Jesus wasn’t just any ordinary man, he was the Son of God. When he died God’s power was shown.

The curtain that was in the Temple, a curtain that separated people from going near God’s presence, was separated in two – just as if God Himself had split it! (Matthew 27:51) That curtain being split showed the people that they were no longer cut off from hearing and knowing God personally, but if they wanted, they could know Him for themselves! For a long time only special priests and leaders could do that, but now, anyone could encounter into the Holy Place with God.

The people saw God’s power. They saw how powerful He truly is! Have you ever seen God’s power for yourself? Have you noticed how He created the world? How he formed the sky, the sea, the hills, fields, forests and deserts? Have you recognized how great and how powerful He is? As Jeremiah, a prophet in the bible, says, “It is He who made the earth by His power, Who established the world by His wisdom, And by His understanding He stretched out the heavens.” (Jeremiah 51:15)

If you’re a follower of Jesus today, then remember that people see God’s power in you! 1 Corinthians 3:16 says “Don’t you know that you yourselves are God’s temple and that God’s Spirit dwells in your midst?” You have God’s Holy Spirit, His power and presence within you! That means that when you are living for Jesus people are taking notice because people see God’s power! Be encouraged that He is doing amazing things in and through you!

Watch the funny Simpson video where Bart tests a megaphone.

Say: Bart was funny in that mini video wasn’t he?! But the thing is, that because of the megaphone he made, there was power in what he said. Do you know what the word ‘proclaim’ means?  What does it mean to proclaim something?! It means to say something, or to show something, it is a statement, something that you call out. Jesus called out a few things on the cross, but the thing that really spoke to the soldier was the power that he saw. The power proclaimed to him who Jesus was. It was the power that showed the soldier that Jesus “truly was the Son of God” (Matthew 27:54) The power of God spoke to him. It touched his heart and made him think. It made him realize that Jesus really was who he had said he was all along!

As a result of the power of God speaking to the solder, the soldier also proclaimed, he called out and said that Jesus was the Son of God. That’s a pretty big thing to say! Yet the power of God proclaims that Jesus is the Son of God – and that makes others proclaim it also when they realize that it is the truth! Are you proclaiming God’s power – are you telling others about what Jesus has done in your life?

Have someone stand to the side of the room and use a loudspeaker to start singing. Try to speak to the children and tell them that you are going to be making your next point very shortly….try to keep speaking, but make it obvious that the loudspeaker is interrupting you…. until finally you have to ask the person to stop speaking/singing.

Say: That voice was really loud – it had a lot of power! I had to stop it because I just couldn’t ignore it – I had to do something about it! That’s the same with us and Jesus – we can’t ignore his power! We might try, but like the Roman soldier we realize that we have to react in some way to who Jesus is and what he has done… we can’t just ignore him!

This power is the power to heal, the power to forgive. Jesus went to the cross because he was willing to die so that we might know God – so that we might be forgiven for the wrong things that we have done. He is completely perfect. While on the earth he never did a thing wrong. Yet our wrong actions, thoughts and words demanded blood to be shed. That’s what the bible says – God can’t be around sin – our wrong things. So Jesus paid the price – he shed his blood and died so that we might know God. Galatians 3:13 says “Christ did this so that God’s blessing promised to Abraham might come to the non-Jews. This blessing comes through Jesus Christ. Jesus died so that we could have the Spirit that God promised and receive this promise by believing.” If that’s true, then we can’t ignore that kind of power! That’s the power to forgive us and to provide a way to heaven – to knowing God the Father.

C.S. Lewis said that when we encounter Jesus we have to decide who he is – and there are only three options. Either Jesus was a bad man – a lier, a mad man – completely crazy – or he was God! He couldn’t just be a good man because he told people he was God. A good man wouldn’t pretend to be God – he wouldn’t lie. The kind of power that Jesus showed when he healed people, and the kind of power that was shown when he died on the cross shows that surely he is God?! And he gives us an opportunity to realize that, just as the soldier did, today. Will you come to Jesus? Will you be found saying “Truly, you are the Son of God!”

GAME: Write the names of each bible character on individual sheets of paper (with a picture depending on the age of your group) and scatter them on the floor. Play a game of Musical Islands; where players must dance around the papers until the music stops. When the music stops players must stand on one of the papers. At this point you can choose someone to tell you who the bible character is that they have stood on and how that bible character saw God’s power at work. When you continue playing take that piece of paper away. Then stop the music again and begin the process again. Children that are not quick enough to find a paper to stand on are eliminated from the game.

Who else saw God’s power at work?

How would it feel to stand at the foot of the cross and realize that Jesus truly is the Son of God?

Play the video ‘Jesus Gave It All’ by Life TV.

Say: Jesus gave everything that he had – his whole life and death – for you and me, so that we might know God. Let’s spend a few moments speaking to him from our heart. What do you want to say to him? Say it now in your heart.

[Pray that the Holy Spirit would stir within the children and lead them to the revelation of Christ and all that he did for them on the cross.]

Thank You Jesus for all that You did for us on the cross. We will never be able to repay You for all that You have done. We love You and we thank You. Please forgive us for the wrong that we have done. Help us to live for You when we leave this place. 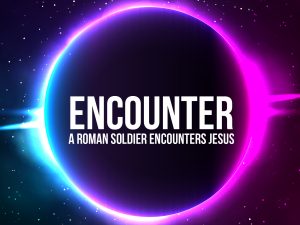