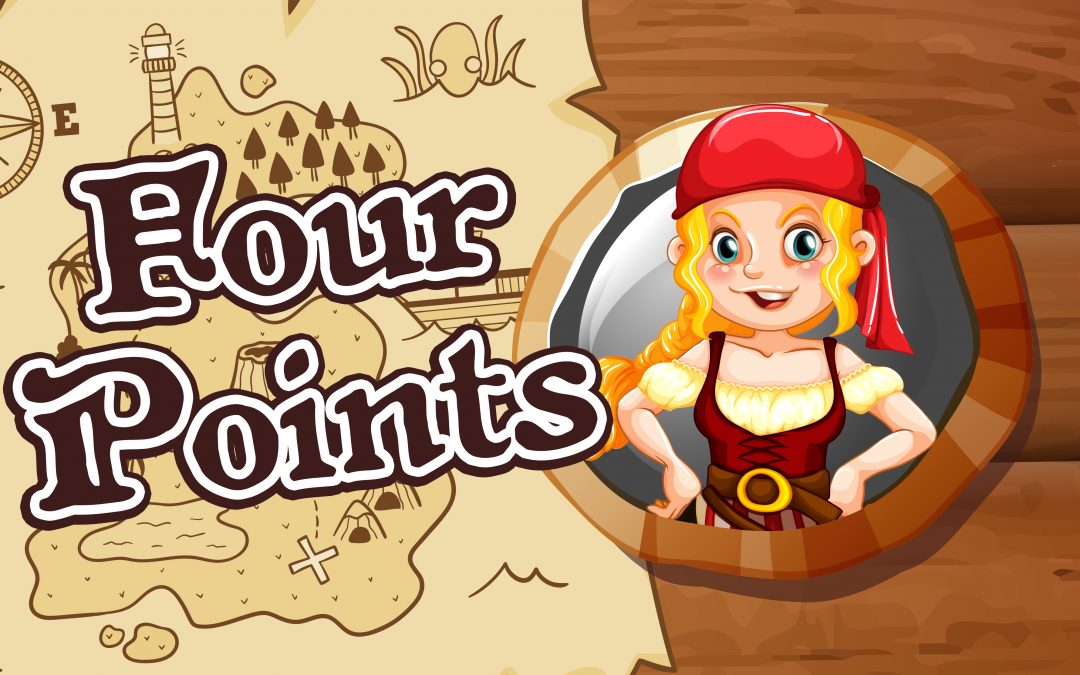 AIM: The ‘The Four Points’ Childrens Lesson (Pirate Theme) is the sixth session in the ‘Pirates’ series by KidzKlub. You can find the session PDF here.

The cabin boy/girl enters, and tells us that the supplies are getting really low, so there’s only one drycracker each for breakfast!

You will need: One cream cracker for each child present, plus a few for the adults on the stage.

Before the game starts hand a cream cracker to every child. Explain that they can’t eat them until you say so. When you say “Go!,” they eat the cracker as fast as they can and then open their mouth wide to prove it’s gone. The winners are the first team to have ten people finish. For added amusement the team captains can be on the stage eating multiple crackers and spitting the bits everywhere.

You will need: A metal dustbin lid, or a plastic one sprayed silver.

One of the team captains arrives with a bin lid sprayed silver. It’s a satellite dish he’s been developing, so you can track Gonzo. You want to try and pick up a telescopic video beam that Gonzo is transmitting, so you can see where Hook is hiding him. (If you don’t have a video projector, then you’re trying to pick up radio waves instead!) But it doesn’t work! The trouble is, your satellite tower isn’t high enough.

You will need: A pre-recorded video or audio clip from Gonzo, making “Ook!” type noises.

Play some sci-fi type sound effects while you try the satellite dish out. If you’ve got a video projector, play a pre-recorded video message from Gonzo, pretending it’s a live link-up. If you haven’t got a video projector use an audio message instead. Gonzo is being kept in a dungeon and he’s only allowed to eat sprouts and spinach. Please come and rescue him. Hook is very strong, so if you’re going to get Gonzo back you’re going to need to work out.

You will need: A long, thick rope.

We’re sure we don’t need to describe this game, but just in case, here goes! Choose four players from each team. Line them up opposite each other, holding on to their end of the rope. When you say “Go!” both teams pull the rope as hard as they can. The first team to pull their opponents over to their side of the stage are the winners.

The memory verse this week asks if anyone dares to be dunked in the paddling pool. While you’re getting the kids to put their hands up, Hook and the cannibals sneak on and empty loads off icecubes into the paddling pool. Oh no! Now it’s –10 degrees. Does anyone still dare to do it?

Choose one player from each team. This is a timed game, so one team goes first and then the other. The players need to take their socks and shoes off. When you say go, two adult helpers pick them up from their place by their arms and legs, carry them to the paddling pool and dunk them in. The winners are the fastest team. Both players get £5 for completing the challenge. NB: After the game send the children to the toilets to get changed into dry clothes. You may want to send a helper home with them to explain to the parents what happened. We find that most parents are quite good humoured about things like this, especially if their child comes home armed with a fiver. If your club meets on a week night, you may want to pick a child who’s not in school uniform.

You will need: A never-ending water jug. If you don’t already have one, you can order them from Tricks for Truth by phoning 01706 649921 or visiting their website at www.tricksfortruth.co.uk. You’ll need to practice this object lesson with the jug to get the timing right. The idea is that as you’re pouring the water out, you’re explaining how much God loves us. When it stops you need to refer to one reason why the kids might doubt God’s love. Every time the water stops, you need to give the jug a good shake upside down, so the kids can see that the water has “run out.” Then turn it the right way up to refill, before pouring out another lot of water and reaffirming that God really does love us. Kids, every week at church we learn about how much God loves us.

God thinks each one of us is fantastic and just like the water in my jug keeps on flowing, his love for you will go on and on and on. But what about other people’s love. What about if you’re so naughty at home, that your mum gets mad at you and it seems like her loves run out? I mean, if you’ve been that bad, won’t God’s love for you stop too? Well the Bible says, no it won’t. No matter what anyone else says about you, God thinks you’re brilliant and God’s love for you will carry on forever. But hang on, what about if you do something really bad, not just a little bit naughty, but really nasty; wouldn’t God stop loving you then?

Well, the Bible says, no, he wouldn’t. God doesn’t like the bad things we do, but they don’t stop him loving us. God knows everything about you, the good things you do and the bad things. He knows about the hidden nasty things inside, that no one else knows about and he still loves you. God’s love won’t stop because of what you say or what you do. God’s love is bigger than that. Friends might get fed up of you. Other people might leave you, but God won’t. That’s why point number one says God loves me.

2) OBJECT LESSON: I HAVE SINNED

You will need: a dartboard and some darts.

Kids, point number two says, I have sinned. That means that we’ve all done things wrong. Now, some of you might be thinking, “Well OK, I have done some things wrong, but I mean, I’ve never done anything really bad. My sins are just kind of little sins, so isn’t that OK?” Well, the Bible says, no, it’s not. Every time we sin, even a little bit, it’s like we’re missing God’s mark for our lives. We’re not living the way God made us to live and we’re not being the people he made us to be.

Put your hand up if you’ve ever played darts. Now, I’m not very good at darts and often I miss the board altogether. Sometime I just miss it by a little bit. (throw a dart so it lands slightly to one side of the board) And sometimes I’m so rubbish I miss it by a lot. (throw a dart so it lands miles away) But you know, either way, it doesn’t really make much difference. I’ve still missed the target. I’m not going to win.

Kids, God’s got a target for your life. It’s for you to be loving and holy, just like he is. And it doesn’t matter whether you’ve missed God’s target by a long way, by murdering and stealing or just by a little way, though arguing with your mum and being mean to your brothers and sisters, you’ve still missed it. And missing God’s target means that you can’t be his friend. You can’t know how good it is to have him help you and be on your side and you’ll never have the strength to be a real winner in life. Kids, our sin is a serious thing. And we need someone to help us sort it out. Let’s say point number two together: I have sinned.

3) JESUS DIED FOR ME

You will need: A picture on the screen of Jesus on the cross or a replica crown of thorns or nails. You obviously want to monitor how graphic it is, depending on the age of children in your club. The person who does this lesson should be a parent. A picture of their child will be shown.

That’s right, the Bible says that the punishment for breaking God’s laws is death, being separated from God forever.

Now, if you really loved someone, say your best mate, you might take a small punishment for them. You might let your name go on the board, when really they were talking, to stop them getting on their last warning. But no one would take a big punishment for someone else – would they? I mean, you’d be crazy to choose be punished for something someone else had done. Well, when Jesus died on the cross that’s exactly what he did. He was spat at and made fun of. He had big nails put through his hands and his ankles and thorns hammered into his head and he was left on a cross to die. He hung there for nine hours, nine hours of agony and do you know why he did it? To take our punishment for us. Jesus died, so we could be let off. Jesus died to take the blame for my sin and (team captain’s name) sin and (team captain’s name) for all our sin. And God watched it happen.

Jesus was God’s son. I’ve got a son/daughter called (child’s name). This was him/her when he/she was little. You know that I love you guys, but if you did something wrong, there’s no way that I could let (child’s name) get hurt, so you could be let off. I love you, but not that much. But God’s love is a whole different type of love. He does love you that much. So much in fact that he did let his own son, not just be hurt, but die, so you could be let off. When Jesus died he was dying for you. Let’s say it together. Point number three: Jesus Died for Me.

4) OBJECT LESSON: I NEED TO DECIDE TO LIVE FOR GOD

Kids, let’s remind ourselves of the first three points that we’ve learnt today. Point number one says God loves me. (Show screen one) God loves us and he made us to be his friends. Point number two says I have sinned. (Show screen two) When we do things wrong, our sin opens up a gap between us and God. We push him away and we can’t be friends with him anymore. Point number three says Jesus died for me. (Show screen three) When Jesus died on the cross he closed that gap between us and God. And now point number four says that we’ve got a choice to make. God isn’t going to force us to be friends with him. We have to choose that for ourselves. (Show screen four) Do you want to decide to live for God today? Do you want to say sorry for your sin and become God’s friend again, listening to him and living his way? If you do we’re going to pray right now… (lead the children in a prayer of repentance and salvation in whatever way you feel most comfortable with) 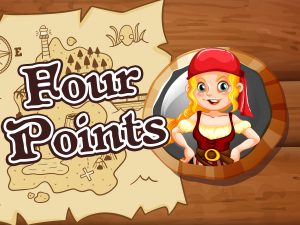 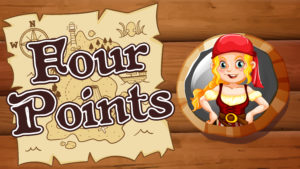