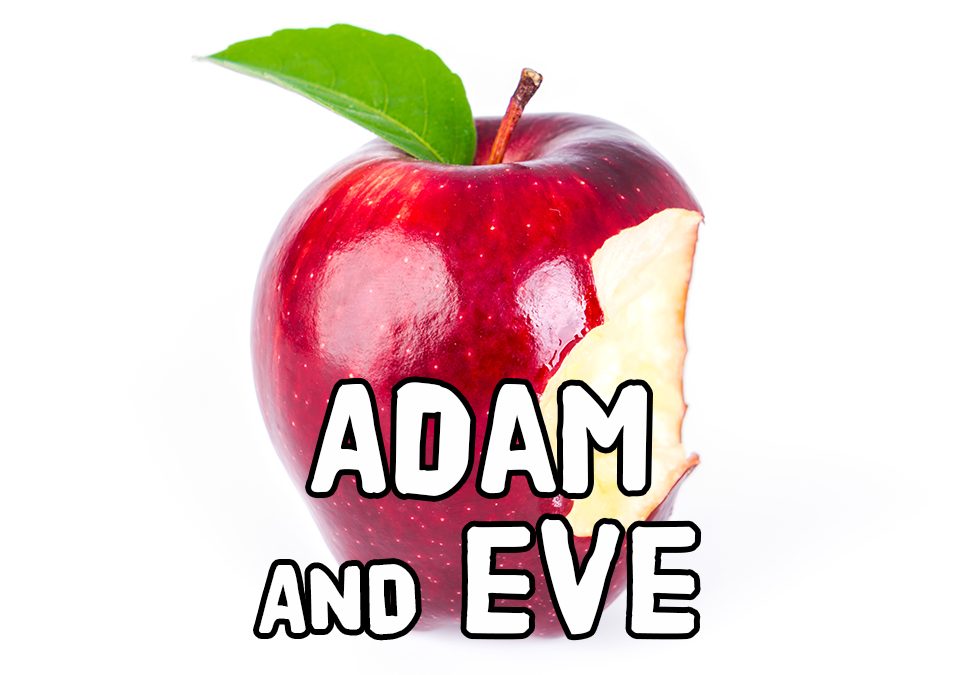 The first people made were a right famous pair!

Some call them stupid, but that seems unfair.

Adam and Eve, those were their names.

He made Adam, I’m sure it was mucky,

from dirt that was grubby and very yucky!

Then Eve He made with Adam’s rib.

I’m not even lying or telling a fib!

A sleep that must have been terribly deep!

Or could you imagine how it would have hurt?

To pull out a rib; how the blood would have splurt!

A garden God gave to Adam and Eve.

This great garden they hoped they never would leave.

“You can eat anything from all of these trees.”

God said – “you can eat all you like from all these.

Except from that one tree in the centre just there.”

His kids seemed to think that was really quite fair.

“That tree will cause death to one who would eat.”

God never planned for their deaths to now meet.

But the serpent was cunning and disgustingly sly,

when they were alone he slipped in and did try

to make them believe that God wasn’t that good.

lie to them and deceive them just like a bad man.

It was all part of the serpent’s repulsive plan!

“Did God really ssssay you can’t eat any fruit?”

This started to set off a ghastly dispute.

“Only the fruit from that one simple tree.”

They said as they ate all their grub for free.

“You won’t cccccertainly die!” the serpent then hissed.

He was giving God’s words a bit of a twist.

“God knowsss that you will then ssssee good from bad.

He’s ssstopping you from being like Him; your good old dad.”

Eve saw the juicy fruit was good to eat.

For the serpent, she was easy to deceive.

She took a big bite and then gave it to Adam.

You could say this girl was a bit of a madam!

Adam ate it and then they both then saw:

they were gobsmacked and simply paused with awe.

You see, you might think this part rather rude –

Adam and Eve were stood in the nude!

Quickly they sewed some fig leaves together.

These fig leaves they’d wear whatever the weather.

God was now walking through this Garden of Eden.

He called out to His kids, He must have known what they’d eaten.

“Where are you?” He called, they were hiding it’s clear.

Adam said “I heard you walking through the garden so near,

so I hid” he knew everyone could see his rear.

“Who told you that you were naked?” God said all sincere.

Of course, God knew everything and didn’t need to ask,

but He was making a way for his children to unmask.

To reveal to their Father what they had both done.

To face Him with their rebellion was not at all fun.

God said, “I commanded you don’t eat from that tree.

Did you eat?”  God asked, although He could foresee.

“It’s this woman you gave me!” Adam spilled out his guts.

At this point I’m sure Eve must have thought he’d gone nuts!

Adam said, “She was the one who gave me that fruit!

So I ate it.” Can you believe Adam was such a brute?!

“What have you done?” God then asked the couple.

Eve must have looked guilty, did she cause the trouble?

“The serpent he tricked me!” Eve said with some panic.

This blaming was easy but a little bit manic.

God looked at the serpent and then He declared;

“Because you have done this, and you even dared,

you will be cursed and on your belly you’ll go.

You’ll eat dust all your life, that’s not the worst of it though.

Between you and the woman it’ll be hatred you both feel.

Between your seed and hers, He’ll bruise your head, you His heel.

To the woman God said, “you’ll have pain giving birth.

Your desire will be your husband, for what it’s worth.

He shall rule over you,” God finished by saying.

Then turning to Adam He started conveying;

“Because you have listened to your young wife

you’ll be facing the consequences all your life.

You ate from the tree that I had said “No.”

Now cursed is the land that you’ll dig up and sow.

Thick weeds and big thorns will now grow from the ground.

You’ll sweat and work hard for the food that you’ve found.

From dust you were made and to dust you will go.”

God dressed Adam and Eve in animal skins so

He could take them both out of the Garden of Eden.

All because they’d disobeyed and they both had eaten.

Adam and Eve wouldn’t eat from the tree of life,

they would have to live their life with some strife.

Angels guarded the gate of the greatest of places.

That Garden of Eden would never see their faces.

They could never go back, a sword of fire made sure.

You see, Adam and Eve were no longer pure.

They had disobeyed God and turned their own way

and now for the rest of their lives they would pay.

This sounds a sad story, and truly it is,

but God never forgot that these children were His.

This story is just the first part of God’s great tale.

There comes a great hero that never would fail.

Unlike Adam, this hero always did what was right.

He never lied, swore or cheated or started a fight.

This hero was born to save all of mankind,

to remind us that by God we were designed.

To show us that though we have all turned away –

and just like Adam and Eve we all did betray –

we’ll one day return to the most perfect place,

if we give our lives to this hero and receive His grace.

that God greatly gives and He does take away.

Yet He loves us and made in His image we’ll stay.

He’s made us His children and a big rescue plan.

So let’s turn to Him now as fast as we can!