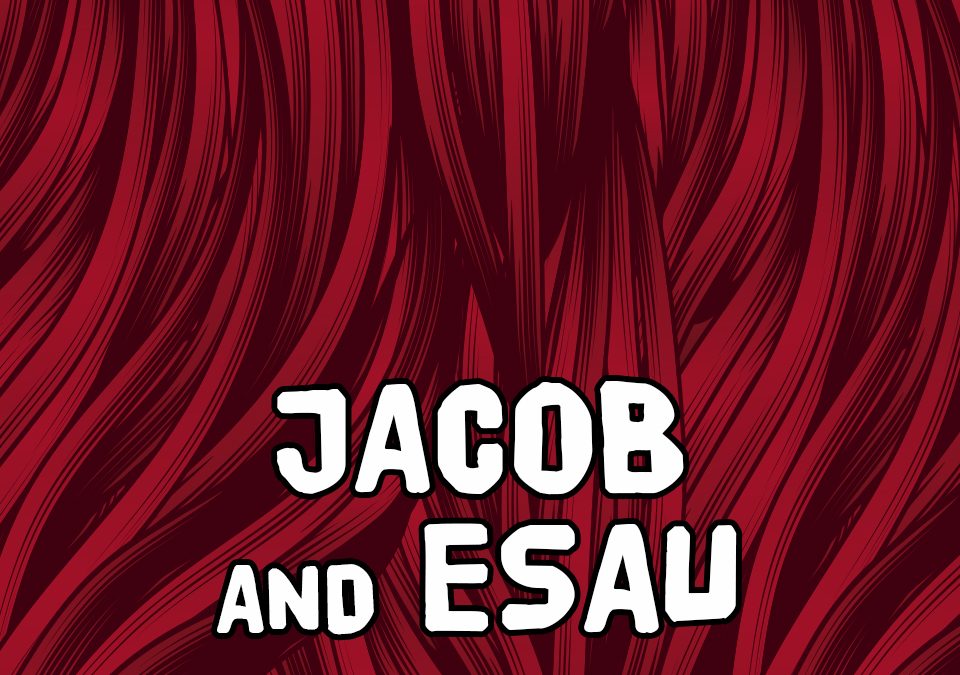 The ‘Jacob and Esau’ Bible Story Poem is a fun poem that is part of the ‘Gruesome and Gory Bible story’ collection of poems for 7-11 year olds written by Katy Hailes.

Jacob and Esau both were twins,

Although they had very different skins.

Esau was the thick skinned one;

He’d go hunting and every hunt he had won.

He was covered in thick and glorious red hair!

You’d never put Esau with Jacob as a pair.

Since they had popped out she knew he was the one.

Jacob was canny, cunning and keen,

Though his tricks were sometimes especially mean.

Before the boys had been famously born

Their Mom; Rebecca, God did warn.

If she had listened at all that time

There would be no need for this little rhyme.

God said, ‘Two nations lie in your body this day,

But it isn’t what you think I’m going to say.

One nation, it will be a great deal stronger,

Yet the older, he will serve the younger.”

That wasn’t at all how it was meant to be;

The younger always served the older, you see.

When the brothers came out there was no delay,

Esau was first, Jacob not far away.

Jacob had clung to his brother’s own heel

But God had already told his mom of the deal.

No doubt, there is a great story to tell:

It all starts when Esau, a pot, he did smell.

One day bubbling in the cooking pot

Into Esau’s nostrils the smell diffused

Esau was starving so off he then moved.

What can I do to get it into my tummy?”

Jacob, I imagine, was grinning inside.

His intention he didn’t even attempt to now hide.

“Sell me your rights as the first born son!”

You’d think Esau would reject this proposal and run!

But Esau cried out, “I’m so hungry I’ll die,

So that’s when Esau made a terrible mistake.

One that wouldn’t be so easy to shake.

That Jacob would get all the rights of an heir.

Esau ate, he’d been caught in a snare

But then, it’s clear he didn’t seem to care.

Some time went by in the blink of an eye

But next, came Jacob’s humongous lie.

When their poor dad Isaac was getting quite old

His eyes were going blind, that’s what we are told.

He called Esau, “Wait! Please go out to the field.

Kill me and cook a tasty meal” he appealed.

“Then I will bless you before I will die.”

Esau ran out, he didn’t even cry.

Rebecca had heard all that Isaac had rasped

And to her youngest son Jacob she now had clasped.

She whispered, “Did you hear what he muttered?

It’s then, her great scheme, she quickly uttered.

This deal would be easy to bring about

It would definitely work, she had no doubt.

“Go out and find the best two goats to cook.

We’ll fool your father, by hook or by crook.

I’ll cook the goats and then to him you’ll serve!

Your Father won’t think you have the nerve.”

Then Jacob shrieked, “But I have no hair!

My arms aren’t like Esau’s, they are so bare!

When he touches my arm, he’ll scream and shout!”

Jacob was worried he’d be banished and cursed,

But his mom wasn’t worried, she had it all rehearsed.

She said, “If he curses you, I’ll take the blame.”

Jacob did as she asked, and he fetched the goats.

She cooked them for Isaac and grabbed Esau’s coats.

She put them on Jacob and took the goats skins, of course.

Wrapping them on Jacob’s arms and neck, she had no remorse.

She gave Jacob the meal and the bread she had made,

Then Jacob went off to see his father, Esau he betrayed.

Cracking open the door he yelled, “Father!” and waited.

“Yes, my son. Who are you?” soon the name would be stated.

The meal I’ve cooked you will simply stun!

Sit up and eat and then bless me today.”

Isaac was curious, he had a question that day.

“How did you find and cook it so fast?”

Jacob’s answer was strong and so steadfast.

“The Lord led me to find it” Jacob lied through his teeth.

He wanted the blessing his father would bequeath.

If he was really his eldest son Esau, or a faker or wannabe.

“You sound like my Jacob!” Isaac said all confused,

But as he felt his son’s hands his face looked bemused.

“Are you really my Esau?” Isaac asked looking dazed.

“Yes I am!” Jacob deceived without being fazed.

Isaac said, “Bring me the food, then you, I will bless.”

But Jacob went on with this diabolical sham.

He lured Isaac in, as if part of a program.

Isaac ate and he drank and then Jacob came close.

Isaac smelled Esau, not knowing it was his coats.

Isaac blessed Jacob with grain and plenty of rain

He prayed that influence and power he’d obtain.

He blessed Jacob with mastery over his brother;

This blessing was robbed and all planned by their mother.

When the blessing was done, Esau flew through the door,

He hadn’t seen Jacob’s show, so he spoke out therefore.

“Father eat the food I have made, and bless me this day!”

“Who are you?” Isaac asked Esau, it was their dooms day.

Of course, Esau told Isaac that he was his son;

But this was a tragedy Esau could not out run.

He begged and he cried to take back the blessing

He pleaded for another, it was all quite distressing.

But Jacob would rule over Esau it seemed

“It means deceiver, and that’s what he is!” he groaned.

“Jacob has taken my share of all my dad owns.”

Esau wanted to crush all of his brother’s bones.

This underhanded act was a complete outrage!

Now, I’m sure you know, this isn’t the final episode

But this is how Jacob broke the Brother’s Code.

For some time after Esau hated his brother

It would sadly take him years to recover.

Yet Esau didn’t respect at all that he’d got

He gave it all away for what was in that pot.

Don’t be like young Esau, thank God for your stuff.

Thank Him for everything, you’ve been given enough.

And don’t be like Jacob in this tale, please don’t!

If you wait for what’s yours, you’ll not need to, you won’t!

God has a good plan and He lets it unwind

If Jacob had waited he might have been kind.

Liars scare others and they give them the shivers

God gives what He’s promised and He always delivers.

For sure, we’ll never need to turn to a life of crime.

We’ll not need to deceive to get our own way,

Unlike Jacob and Esau let’s wait and let’s pray:

And watch as we see that God’s plans do unfold

They aren’t just a fairytale or something we’re told.

You probably should know that Jacob did change

And God did forgive him which isn’t at all strange.

To love and forgive every woman and man.

Soon Jacob would have twelve of his own sons

He didn’t just have one, he had tons and tons!

The twelve tribes of Israel they would one day become

And it all was started off by Isaac’s deceiving son.

So if Jacob can turn to God and be used

You can know that you will never be refused.

Just turn to Him now and give Him your heart

If you do, in His big plan you’ll find your part.

Instead we can know that God’s faithful and true.

Just hold on and know that whatever you face

Whatever you do God always gives His grace.