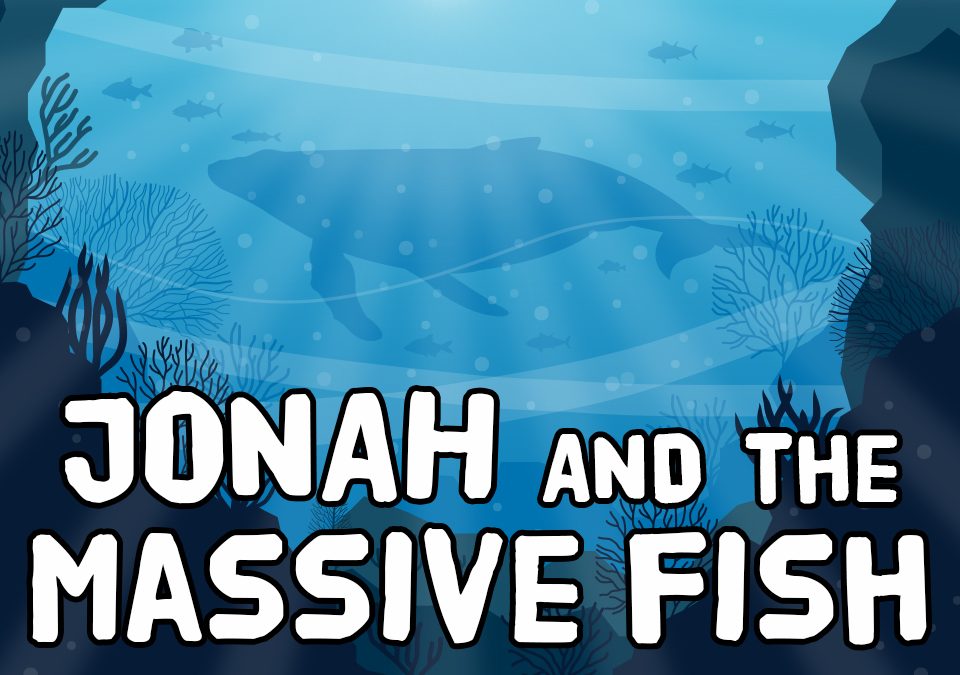 There is a very massive fish.

He’ll never land on any dish.

He is too big, too fat for that,

he’s even bigger than a wombat!

One day he did try to endeavor,

to guzzle up a little man,

who was trying to run away from God’s plan.

Jonah was the man that tried,

He didn’t want to go and preach,

to Ninevites he wouldn’t teach.

Now Ninevah; God had told him to go.

But Jonah had refused and said no.

Instead he ran the other way,

to Tarshish he would sail and play.

’Til on the boat the storm it brewed,

it screamed and howled and raged and spued.

While Jonah slept the men’s outcry

The Captain then woke Jonah up.

He glared at Jonah and got close up.

I am a Hebrew, I fear the Lord,

I ran away and came aboard

this ship and now I fear the worst,

if I stay on this ship, we’ll all be cursed!

Pick me up and chuck me out!

This mess I did now bring about.”

The men they tried to save the day,

But couldn’t row through the waves and spray.

And so they gave a heave and a ho

And chucked him out with one big throw!

He splashed and splished while in the sea,

No time to relax or to have a wee!

He almost drowned and lost his breath,

That’s when the fish did swallow him whole –

that wasn’t at all part of Jonah’s goal!

Now in the Fish’s smelly belly,

until he cried out to the Lord.

Amidst this massive stinky place,

Jonah fell down on his face.

He probably wanted to heave and to hurl,

But prayer, he decided to give it a whirl.

God heard his prayer and spoke to the fish.

Jonah had been so very selfish.

Then out of the stomach Jonah was spit,

(unless it wasn’t drool but really vomit.)

Off to Ninevah he walked,

his breath must have stank when he then talked.

But the Ninevites were not deterred,

as Jonah spoke they all had heard.

He told them all to turn to God –

I’m sure at first they thought it odd.

were carnal brutes long ago.

that the Ninevites needed to turn to the Lord!

In forty days they would be killed.

This prophecy would be fulfilled.

Now you can probably visualize,

all that the Ninevites were doing.

Even though the Ninevites God was pursuing.

That’s why he’d run and not obeyed.

He was angry, annoyed and a little afraid.

Would these crazy evil fellas

turn to God, please can you tell us?

The King sent a command through the city,

he didn’t set up an appeal or committee.

“Fast and cry out to the Lord!

This evil life we can’t afford!

Change your ways and just be kind

and maybe this God will change his mind!”

God; He saw how they had changed

and a cease fire He then arranged.

No more would they all be destroyed,

a killing He would now avoid.

Jonah was so furious

which is a little bit curious.

and now his anger started to burn.

“I knew that God was loving and kind,

mercy is one of His traits you will find.

Just kill me now I don’t want to live!”

This drama I’m afraid you’ll have to forgive.

Jonah, he sat and he watched with awe.

Would God attack or would He withdraw?

as day went to night and the light did fade.

The next day Jonah’s plant had died.

Jonah was so mad he cried and cried.

A worm had nibbled and killed the plant;

it bit and it chewed until it was scant,

and then the sun beat down on his head.

Jonah started to wish that he was dead.

God said, “Jonah should you rant

about a little bitty plant?”

Jonah vented, “Yes I should!

I’d stay angry all my life if I could!”

Then God shared with Jonah why

He’d made the Ninevites all His ally.

“Jonah, that plant you showed concern

but the plant you didn’t make, grow or earn.

It just popped up from the ground;

one day it bloomed, the next it was a mound.

But Ninevah; I’ve loved and created.

These people, to me, they all belong.

They just didn’t know what was right from wrong,

but now I can now celebrate

my children now have left their hate.”

Some time later God would send

His only Son to be our friend.

He’d be rejected, beat and die,

for never doing wrong or telling a lie.

He’d make the way for us to know

the Father God, the Spirit and so

if we would ask him into our life

He’d help us with our trouble and strife.

He’d send us to this world so dear,

to tell them of His love each year.

Jesus gives us strength to go,

unlike Jonah, let’s not say no.