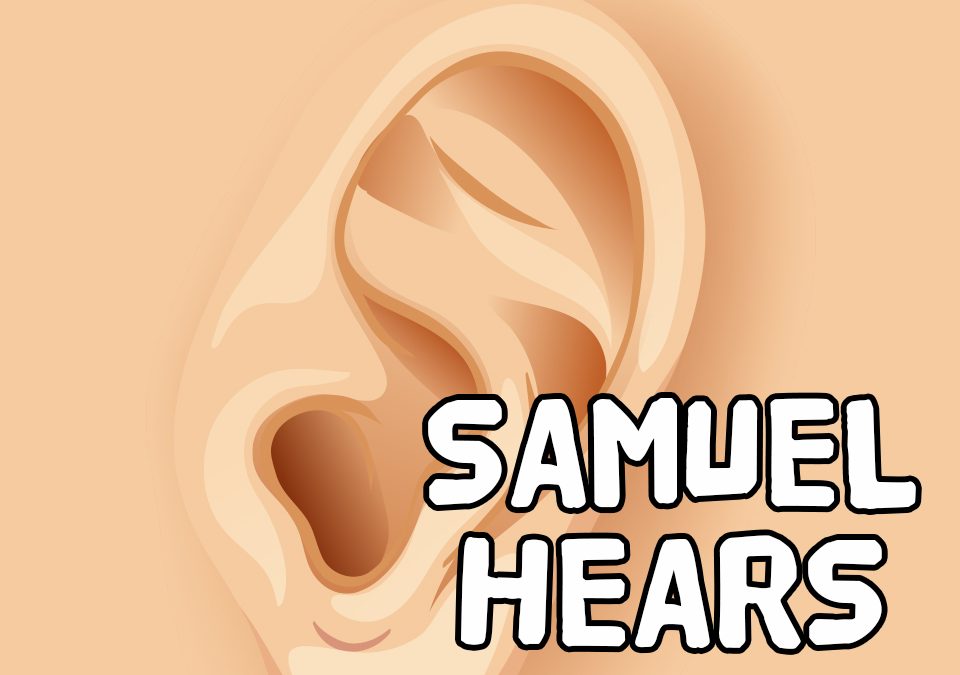 The ‘Samuel Hears’ Bible Story Poem is a fun re-take on the classic bible story. This poem is part of the ‘Gruesome and Gory Bible Story’ collection of poems written by Katy Hailes for 7-11 year olds.

There was a kid with giant ears
He must have looked so odd!
They must have been so very big
To hear the Living God.

But that’s not true, no not at all
I’m afraid it’s fiddlesticks!
Samuel was the kid that heard
And he wasn’t playing tricks.

He was a normal regular kid,
Who just so happened to hear.
The Lord who called him late one night
And spoke right in his ear.

“Samuel, Samuel,” the voice it rang
While the kid was curled in bed.
“Here I am!” the boy replied.
Then ran to Eli and said:

“Here I am! You called me,”
But Eli hadn’t heard.
“I didn’t call! Now go lie down!”
Eli thought it all absurd.

But once again the voice it rang
While Samuel tried to sleep.
“Samuel!” the sound it stirred
And Samuel couldn’t keep.

He ran to Eli and said again
although a bit bemused:
“Here I am! You called me,”
But Eli looked confused.

“My son, I didn’t call you,”
He looked into his eyes.
Samuel must have thought it strange
And was possibly a bit surprised.

Then creeping back inside his bed
And wondering who it could be
The voice it cried another time
“Samuel!” but he couldn’t see.

So Samuel went to Eli again
Probably beetroot red!
This was the third time after all
That he’d got out of his bed!

He must have been a little embarrassed
I wonder if he was shy,
“Here I am, you called me”
Then he waited for Eli’s reply.

Then Eli had a lightbulb moment
It suddenly came to his mind.
It wasn’t he who called the lad –
But of course, the Lord, you will find!

Go check the Book! And you will see!
God was calling out.
He wanted to see what Samuel would do.
Would he listen or would he shout?

“Go back to bed and if He calls
Just remember then to say:
“Speak Lord, your servant’s listening”
That was Eli’s advice that day.

So Samuel did as Eli asked
He was an obedient child.
And then God spoke with unrelenting force –
His word – it wasn’t mild.

“The word I gave to Eli
Will now soon come to pass
Eli and his sons all sinned”
Samuel must have thought: alas!

He kept the word ’til morning
And didn’t tell anyone
But Eli made him tell him
So the Lord’s work would be done.

Samuel was obedient
And didn’t act in fear.
He now had learned to listen to God
And to draw to the Lord, so near.

So know that if you are a kid
Or if you’re fully grown
You can listen out for God
As you’re already fully known.

The Lord, He had called out the name
Of Samuel, that child.
He knows exactly who you are
And if you’re tame or wild.

You don’t need giant ears to hear
Or great big eyes to see
You only need a heart that’s willing
To be all He’s called you to be.

God; He speaks in so many ways
Through dreams and people too.
So why not listen out for Him?
And you’ll realise it’s true.